New York Times: The three American hikers accused of espionage by Iran stepped off an unmarked dirt road — inadvertently crossing from Iraq into the Islamic republic — only because a border guard of unknown nationality gestured for them to approach, the lone hiker to be released said Sunday. 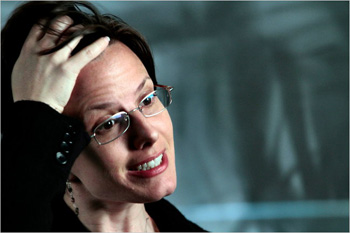 The three American hikers accused of espionage by Iran stepped off an unmarked dirt road — inadvertently crossing from Iraq into the Islamic republic — only because a border guard of unknown nationality gestured for them to approach, the lone hiker to be released said Sunday.

Sarah E. Shourd, a teacher freed in September after nearly 14 months in Tehran’s notorious Evin prison, contacted The New York Times to give her fullest public account yet of the capture of the three in July 2009.

Ms. Shourd, 32, said she wanted to correct the gathering false impression, fueled by a classified United States military report made public last week by WikiLeaks, as well as earlier American and British news reports, that the hikers were detained inside Iraq and forced across the border. Her comments came just days before her two fellow hikers, her fiancé, Shane M. Bauer, and their friend Joshua F. Fattal, both 28, are scheduled to go on trial in Iran on Saturday.

On the fateful day, when they approached the armed border guard who had gestured to them, “He pointed to the ground and said ‘Iran’ and pointed to the trail we had been on before he waved to us, then said ‘Iraq,’ ” Ms. Shourd said by telephone from her home in Oakland, Calif. “We did not actually enter Iran until he gestured to us. We were confused and worried and wanted to go back.”

Instead what seemed like a casual encounter mushroomed into a lengthy incarceration and an extended cause of tension in Iranian-American relations.

Besides stating that the three hikers were captured in Iraq, the American military report, by an anonymous official, also said, “The lack of coordination on the part of these hikers, particularly after being forewarned, indicates an intent to agitate and create publicity regarding international policies on Iran.”

Ms. Shourd said that she was mystified by that conclusion. The three had no idea they were near the border and had not been warned about anything, she said. “Those claims are illogical and unsubstantiated. It is ridiculous to claim that mountain climbers would be agitating along a border.”

The United States State Department has never suggested the version published by WikiLeaks, she said, always maintaining that it did not know how their arrest happened.

The State Department spokesman, Philip J. Crowley, confirmed that on Sunday. “We don’t know whether they had two feet on one side or the other or one foot on each,” he said. “All we know is Iran has held them far too long.”

Ms. Shourd described what began as a relaxed overnight camping trip, undertaken by three reunited friends from Berkeley happy to escape to the fresh, green Kurdish mountains from the sweltering Syrian plains.

She had been teaching English in Damascus, Syria, where Mr. Bauer was working as a freelance journalist while both studied Arabic. Mr. Fattal came to visit, and they set off to Kurdistan after reading on a Web site that it was safe and listening to a friend rave about the place.

Various Kurds suggested they visit Ahmed Awa, a spectacular mountain waterfall where local people camp overnight. The hikers had no idea it abutted Iran, Ms. Shourd said, and twice encountered Kurdish pesh merga soldiers who greeted them warmly. The music and laughter around scores of campfires at the waterfall gave no sense of imminent danger.

The next day, they trekked up a dirt road past the waterfall. After a lunchtime nap, a soldier with a gun appeared on a ridge above them and gestured for them to keep climbing. He was the first person they saw on the mountain, Ms. Shourd said.

About 500 yards farther up, with no sign to indicate the border, a guard standing by a stone hut gestured for them to approach. A news report that a shot had been fired over their heads was wrong, she said.

At a second, larger structure, according to Ms. Shourd, more guards repeating in Persian, “Mushkil nadereh,” or “no problem,” blocked their attempt to run away and ignored their pleas to return to Iraq. Four days and several moves later they ended up in Evin prison, where Mr. Bauer and Mr. Fattal remain.

“I think we were extremely unlucky,” said Ms. Shourd, concluding that their one mistake was hiking too far. “I guess I never believed there would be so many hundreds of people close to a border.”

Chants of God is greatest heard from rooftops