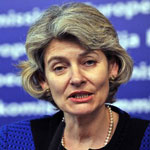 New York Times: The United Nations Educational and Scientific Organization decided on Tuesday to pull the plug on another embarrassment to its reputation, dissociating itself from this year’scelebration of philosophy, to be held in Iran in less than two weeks. 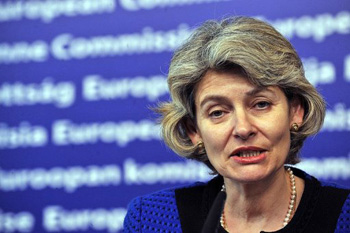 PARIS — The United Nations Educational and Scientific Organization decided on Tuesday to pull the plug on another embarrassment to its reputation, dissociating itself from this year’scelebration of philosophy, to be held in Iran in less than two weeks.

Unesco has been celebrating World Philosophy Day since 2002, but an agreement made quietly in 2008 to host this year’s event in Iran became extremely controversial, given Iran’s record of repression and censorship after disputed elections in 2009. Academics vowed to boycott this year’s event, scheduled for Nov. 21 to 23, and European nations, joined by the United States, urged the organization’s new director-general, Irina Bokova, to cancel the event.

A Paris-based event for philosophy day is expected to go ahead as scheduled on Nov. 18, which Ms. Bokova intends now to be the main celebration.

Western diplomats said that they first raised the issue with Ms. Bokova early this year, when the deal with Iran became more widely known, and this spring, Unesco said the event would go ahead as scheduled. Ms. Bokova announced on Tuesday that the organization would now dissociate itself from any related events in Tehran.

As diplomats and non-governmental organizations built up a better file on the case over the spring and summer, they pointed to the arrests and deportations of notable Iranian academics after the elections and to evidence that the event was being run by harder-line voices in the complicated Iranian system.

France was particularly involved in trying to convince Ms. Bokova to cancel the event, and was joined by other European Union countries in a démarche to Ms. Bokova, whose predecessor, Koichiro Matsuura, had made the deal with Iran in 2008 when Tehran offered to host this year’s event.

A senior Western diplomat pointed out that the decision to hold the day in a particular country was in the power of the director-general and that Unesco’s executive board had never been consulted on the issue.

One letter earlier this month to Ms. Bokova from the American ambassador to Unesco, David T. Killion, pointed to reports that the authorities intended to use World Philosophy Day for political purposes, while Iranian officials said in October that Western social and human sciences were dangerous for Iran. The Iranian minister in charge of science, research and technology announced the freezing of any new academic courses in Western disciplines, including philosophy, until their content could be reviewed to ensure that they conformed to Iran’s religious values.

Another senior Western diplomat said that Ms. Bokova had done the right thing by canceling the event and trying to maintain a dialogue with Tehran, but should have acted sooner. A quicker decision farther away from the event itself might have spared embarrassment both to Unesco and to Iran, which the West is trying to engage in serious talks about nuclear enrichment and regional security.

Ramin Jahanbegloo, an Iranian philosopher who was jailed in 2006 and now teaches at the University of Toronto, was instrumental in organizing an academic boycott of the Tehran event and wrote to Ms. Bokova urging her to reconsider. He pointed out that President Mahmoud Ahmedinejad had installed a hardline politician, Gholam Ali Haddad Adel, whose daughter is married to the son of Iran’s supreme leader, Ayatollah Ali Khamenei, as head of the Iranian Institute of Philosophy.

Ms. Bokova has also worked hard to avoid another inherited embarrassment to Unesco, which was a lavish prize in the life sciences funded by an African dictator, President Teodoro Obiang Neguema Mgasogo of Equatorial Guinea. In October, the executive board agreed to suspend the awarding of the prize until consensus is reached on it among members, which means that it is unlikely to be awarded.

World Philosophy Day began in Paris but has been hosted since in Chile, Morocco, Turkey, Italy and Russia, with subsidiary events the same day in many other countries. Those subsidiary events are expected to go ahead this year.

The Telegraph: America must step up sanctions and bring...