New York Times: Iranian Parliament members recently sent a letter detailing a long list of complaints against President Mahmoud Ahmadinejad to Iran’s powerful Guardian Council, Iranian news media have reported, marking a new phase in an effort by traditional conservatives to rein in the administration and reassert the powers of Iran’s legislative body. 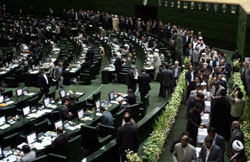 TEHRAN — Iranian Parliament members recently sent a letter detailing a long list of complaints against President Mahmoud Ahmadinejad to Iran’s powerful Guardian Council, Iranian news media have reported, marking a new phase in an effort by traditional conservatives to rein in the administration and reassert the powers of Iran’s legislative body.

The letter, which could theoretically result in the president’s impeachment, was rapidly disavowed by its putative supporters. Many denied having signed the document.

Nevertheless, the uprising is a sign that internal fissures that developed between the Ahmadinejad government and conservatives in Parliament during last year’s wave of protests have yet to be closed.

Mr. Ahmadinejad and the conservatives have sparred frequently since he was first elected, in 2005, with his opponents resisting his cabinet appointments and, this year, fighting his efforts to reduce subsidies on food, fuel and other necessities.

During the protests last summer over the disputed election that kept Mr. Ahmadinejad in office, Ali Akbar Hashemi Rafsanjani, a former president and a leading conservative, was critical of the government’s heavy-handed efforts to suppress the demonstrations.

The latest confrontation came to light on Saturday, when unofficial news outlets reported that an effort had begun in Iran’s Parliament to call the president to account for a number of instances in which his government stood accused of bypassing the constitutional powers of the Parliament and exercising unchecked power.

The letter to the Guardian Council was released to the news media by the Parliament’s in-house news agency. It listed 14 “infringements,” including foot-dragging by the administration on the implementation of a variety of laws, as well as financial irregularities.

Those included three years of unauthorized imports of gasoline and diesel worth around $10 billion and the failure to account for up to 40 percent of Mr. Ahmadinejad’s spending on his numerous visits to Iran’s regions.

Subsequent news reports said that the petition had been signed by more than 40 members of Parliament, among them a number of prominent critics of the president. But on Monday, several members who had been named publicly as supporters of the plan distanced themselves from the letter, some issuing stern denials that the plan had been presented to members for their signatures.

“I did not sign this letter and know nothing about it,” one of them, Elias Naderan, was quoted as saying in Jam-e-Jam, a Web site that is linked with Iran’s state broadcaster, IRIB.

Another member, Hamid-Reza Fuladgar, in the same report, said, “There has been no letter to pose questions to the president, let alone have 40 M.P.’s sign it.”

On Tuesday, Ali Motahari, reported to be the architect of the plan to call Mr. Ahmadinejad to account, was criticized by pro-government members of Parliament. Mr. Motahari has not commented on the letter.

Mr. Ahmadinejad’s power seemed to be further consolidated on Saturday with a statement issued from a joint committee set up in August to resolve the differences between the administration and the Parliament. The statement appeared to grant the president the “right” to issue warnings to other branches of government when, in the president’s opinion, they failed to act in line with the “fundamentals of the Constitution.”

Although the Parliament speaker, Ali Larijani, and other prominent members denied that the committee had agreed on any such statement, political experts here said the fact that it was issued was a sign that Iran’s highest authorities were backing the president in his battle with the legislative branch.

Any extension of presidential powers will help Mr. Ahmadinejad to push through long-delayed reforms of Iran’s vast and inefficient system of subsidies. Plans to remove price supports on gasoline were delayed once again with an announcement on Monday that the monthly 60-liter ration of gasoline per vehicle at the heavily subsidized price of 10 cents per liter will remain in place for at least another month.