Reuters: Tehran is choking. Gridlock on urban highways makes the city feel more like Los Angeles than the Middle East, while adding a toxic yellow halo of smog to otherwise perennially blue skies. 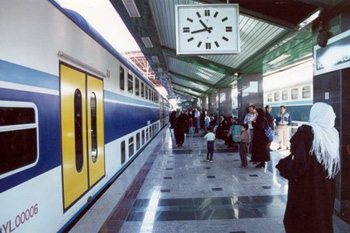 Emergency hospital admissions have risen 20 percent in recent days due to respiratory problems, according to the Health Ministry, and the government all but closed the capital down on Wednesday and Thursday by declaring impromptu holidays for public sector workers – a desperate attempt to clean the air.

With subsidized gasoline costing 1,000 rials per liter, or about 35 U.S. cents per gallon, congestion is almost the only incentive Iranian car owners have to leave their vehicles at home and find other ways of getting around town.

Despite a growing number of imported sports utility vehicles and luxury sedans driven by the wealthy elite of northern Tehran, the roads are still full of rickety cars with outdated emissions standards.

The chief of the city traffic police was quoted by the Tehran Times newspaper in April as saying that “3.8 million cars in Tehran pollute the environment the same amount as 48 million standard cars would do.”

Yet there is an alternative to being stuck in traffic. Below the streets, a gleaming subway system has been in operation since 1999, with four lines that crisscross the city. But Mohsen Hashemi, manager of the Tehran Metro, says it also risks becoming overloaded if it is not upgraded soon.

Parliament has voted to finance an extension of the existing lines, complete two new ones, and extend the network 40 kilometers, or 25 miles, out of the city to Imam Khomeini International Airport. But the work is being delayed in what appears to be a political power struggle over the money.

A planned cut in gasoline subsidies, meanwhile, will push up the price of fuel by 700 percent some time in the coming weeks or months, potentially pushing more people out of their cars and onto the subway, which is already used by two million people every day. The Tehran city government predicts that number could to rise to 2.5 million by March 2011.

Tehran Times quoted Hashemi as saying, “The implementation of the subsidy reform plan will spark off social unrest and rioting in metro stations if the administration does not meet its commitments in releasing money for increasing passenger capacity.”

His protests and those of the mayor, Mohammad-Baqer Qalibaf, have so far failed to persuade the government to release $1 billion approved by Parliament to improve the subway. President Mahmoud Ahmadinejad has threatened to put the subway under central government control.

But the issue is not just a dispute over money. Many residents of Tehran say they believe that the subway has become a pawn in a power game between senior politicians, with Ahmadinejad refusing to release the funds to snub rivals in a deeply divided leadership.

Qalibaf, a former commander of the Islamic Revolutionary Guards Corps, became mayor after losing the 2005 presidential election to Ahmadinejad, who was then the mayor.

Although Qalibaf did not run again in last year’s presidential election, when Ahmadinejad secured a second four-year term, many Iranians see the mayor as a possible contender for the presidency in 2013.

Hashemi, the Metro manager, is also no mere civil servant. His father is Ali Akbar Hashemi Rafsanjani, a former president who was also defeated by Ahmadinejad in 2005 and who remains an important political power broker.

Rafsanjani is a ”pragmatic conservative” and a staunch critic of Ahmadinejad, who voiced sympathy for the reformists whose supporters took to the streets after losing last year’s presidential vote.

Since the reformist camp was all but silenced by the postelection crackdown, it is conservatives within the establishment, like Rafsanjani, Qalibaf and others in Parliament and the judiciary, who pose the biggest domestic threat to Ahmadinejad — who they fear is trying to increase his presidential power at the expense of other branches of government.

“The presidential election and political rivalries have now come to an end,” Amin Shabani, a lawmaker said after Ahmadinejad threatened to take control of the subway. “We should not continue to sacrifice the people for the sake of political issues.”

Payam Azami, a 30-year-old accountant, takes the Tehran Metro home every night, joining the masses of workers who pay a fare of 2,500 rial to ride Line 1 out of northern Tehran.

All the maps show that Line 1 starts at Tajrish Square, a busy northern neighbourhood at the foot of the Alborz mountains. But because of construction delays, the line starts much farther south, requiring Tajrish commuters to take bus or taxi to get to the nearest station.

“The level of improvement has not kept pace with the increase in passengers,” Azami said.

He used to drive, but the congestion, shortage of parking, and a car-free zone in the city center pushed him to use the subway.

In the crowded but clean Chinese-made trains, one car is reserved for women, while the rest are mixed. In buses, however, women are allowed to sit only at the back.

Meanwhile, more than 10 million people live in a space that has the ”environmental capacity” for 3 million, said Mohammad-Hadj Heidarzadeh, a consultant to the municipality. The city, he said, has room for about 700,000 cars, compared with about 3 million vehicles that now choke its streets.

Ahmadinejad has suggested that instead of adapting the city to fit the population, pressure should be relieved by relocating as many as five million people. This would also help the capital cope with the consequences of a devastating earthquake, which seismologists say could strike at any time.

Skeptics question Ahmadinejad’s motives, noting that a smaller city population would diminish Qalibaf’s power base and reduce the number of people who might one day be tempted to repeat the massive street protests that followed the 2009 presidential election.

The subway is just one of several important battlegrounds where Ahmadinejad has battled with rival power centers, including Parliament. Parliament, in theory, has the power to impeach a president, a constitutional right that has never been exercised in the Islamic Republic’s three-decade history.

Parliamentary misgivings have delayed the start-date of Ahmadinejad’s planned subsidy cuts and Parliament is still reviewing the government’s latest five-year economic plan, which covers 2010 to 2015. Ahmadinejad, for his part, goaded lawmakers in September by saying that Parliament was no longer at the center of Iranian affairs.

Many in Parliament and the judiciary worry that he is amassing too much power. Ahmadinejad has even attracted rare criticism from the Revolutionary Guards, the elite military force that is usually considered to be among his most loyal supporters.

“Does being on top justify whatever action the government thinks right, disregarding the law?” the Guards’ magazine asked in a recent article.

But according to Farideh Farhi, an Iran expert at the University of Hawaii, Ahmadinejad retains the support of the supreme leader, Ayatollah Ali Khamenei, and may well prevail in the subway dispute.

“I assume that the fact that Ahmadinejad has not so far disbursed the funds can be explained by the fact that Ayatollah Khamenei also is not very keen on spending the money” on the Metro, Farhi said.

A working group set up by Ayatollah Khamenei to resolve differences between the government and Parliament is also discussing recommendations.

The recommendations, whose fate would be decided by the ayatollah, would require Parliament to identify the sources of financing for any new laws and would limit Parliament’s recourse to appeal if its legislation is overruled by the Guardian Council. The council, which reviews laws for compatibility with Islam and the Constitution, initially ruled against the bill.

“It does seem that Ahmadinejad is getting his way,” Farhi said.

While the politics continues, subway commuters endure the best they can.

“It’s very crowded,” Azami said the other day as he was pushed up against other standing commuters who had given the few available seats to older passengers.

“Most of the time, the people are too tired to fight with each other,” he added. ”They mostly nap or read the papers.”

Reuters: Iran has postponed a scheduled round of talks...

EU talks only if Iran pledges no atomic work – Germany