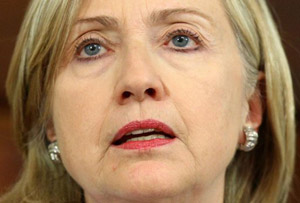 The U.S. secretary of state had a rare chance to interact with Iran’s foreign minister at a Bahrain security conference, which Clinton used to deliver a message to Tehran on the need to engage with the international community over its nuclear program at next week’s talks in Geneva.

But while Clinton’s keynote speech from the podium directly addressed the Iranian team led by Foreign Minister Manouchehr Mottaki, her attempt at a more personal diplomacy with Mottaki fell distinctly flat.

“I got up to leave and he was sitting a couple of seats down from me and shaking people’s hands and he saw me and he stopped and began to turn away,” Clinton told reporters on her plane returning to Washington on Saturday.

“I said ‘Hello, minister.’ He just turned away.”

Clinton’s Bahrain speech on Friday came ahead of next week’s Geneva meeting between Iran and six big powers — the United States, France, Russia, Britain, China and Germany — their first such encounter in more than a year.

The big powers insist that the talks must focus on Iran’s nuclear program, which they fear is aimed at producing nuclear weapons. Iranian officials have indicated that they are not eager to discuss their atomic work, which they say is entirely peaceful, leaving prospects for the Geneva meeting in doubt.

Clinton said she hoped her speech — which described a clear choice for Iran on whether or not to rejoin the international community — was aimed at setting the stage for the Geneva meeting and demonstrating that real dialogue was still possible.

Her aim, she said, was “to do it in a way that they couldn’t claim was accusatory, condemnatory, everything that they always claim about us.”

“We offer to engage, and still have an open door on engagement, but they’ve got to show up in Geneva and negotiate on the nuclear program because it is causing legitimate concern,” Clinton said. “If they proceed it will be profoundly destabilizing.”

Mottaki, for one, didn’t seem destabilized in the least by Clinton’s entreaties. While the U.S. secretary of state laid out her case for broader Iranian engagement, Mottaki concentrated on his dinner — giving no sign that Washington’s latest message to Tehran had been heard.

Path Toward Meaningful Change in Iran: “Overthrow of the Iranian Regime by the Iranian People and Resistance”

AFP: Iran will mass produce replicas of the Bladerunner...