Washington Post: Helen Limachi walked out of a gleaming new hospital in this wind-swept city satisfied with the care her 4-month-old son, Fabricio, had received for his ailing hip. 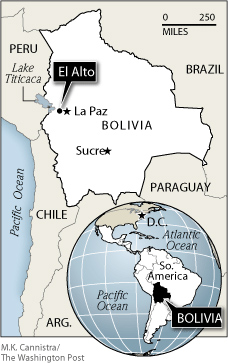 EL ALTO, BOLIVIA – Helen Limachi walked out of a gleaming new hospital in this wind-swept city satisfied with the care her 4-month-old son, Fabricio, had received for his ailing hip.

“The doctor took the time to explain the situation to us,” she said. “He went over the X-ray.”

The appointment and X-ray cost Limachi an affordable 40 bolivianos – roughly $6. Two days later, Limachi and her son returned to the hospital to see an orthopedist.

Good medical treatment is rare in Bolivia, a landlocked South American country where 60 percent of people live below the poverty line. But even more surprising about the year-old, $2.5 million hospital is its donor: the government of Iran, one of Bolivia’s newest allies.

The relationship is part of Iran’s effort to gain a foothold in the region by courting Bolivia, Venezuela and other left-leaning countries in Latin America with aid and business partnerships. The new ties help give both Iran and Bolivia greater international recognition as Iran seeks to challenge U.S. influence, experts say.

“The basic motivation is that Iran and a handful of governments in Latin America are looking for opportunities to counter and attack U.S. influence in the world,” said Cynthia Arnson, director of the Latin American Program at the Woodrow Wilson International Center for Scholars in Washington. “As Latin American countries try to diversify their international partners, Iran offers itself up.”

There is much speculation in Bolivia and in U.S. policy circles – but few hard facts – about the relationship between Bolivia and Iran. Iranian President Mahmoud Ahmadinejad visited Bolivian President Evo Morales for the first time in September 2007. Iran pledged $1.1 billion to help industrialize Bolivia, and the two leaders signed “memos of understanding” related to cooperation in agriculture, trade and energy.

The countries recently exchanged ambassadors, and Morales expressed interest in buying Iranian-built planes and helicopters when he visited Tehran in October. Iran has funded a milk factory and the hospital in El Alto.

But because the two countries have little chance of establishing meaningful trade – and unlike Iran and Venezuela, don’t have oil in common – the relationship remains mostly political.

“This is not economic,” said Jaime Daremblum, director of the Center for Latin American Studies at the Hudson Institute in Washington. “This is politics, imagery and the world noticing, ‘We have lots of friends.’ “

For centuries, foreign countries profited from Bolivia’s vast natural resources while the country remained poor. But Morales is determined to develop Bolivia’s resources – and relationships – on the country’s own terms. In May 2006, he nationalized the oil and gas industries, and his administration is being choosy about how and with whom to develop its vast lithium reserves.

Bolivia has frosty diplomatic relations with the United States, particularly around the issue of coca – the raw material for cocaine that is legal in Bolivia, where people consume it for health purposes.

In the 1990s, the Drug Enforcement Administration backed an aggressive coca-eradication program that led to violence in the country’s Chapare region. In 2006, Morales, head of the country’s biggest union of coca farmers, became president. In 2008, he expelled the U.S. ambassador on charges of conspiring against him and then kicked out the DEA.

Since 2008, the United States has included Bolivia on a list of countries that have “failed demonstrably” in their efforts to fight drugs. Former president Gonzalo Sanchez de Lozada, who in 2003 ordered a military crackdown in which more than 60 people died, now lives in exile in Maryland; the United States has not granted Bolivia’s request to extradite him.

“What will be the reaction of the president who has been treated like this?” Guzman said. “Obviously, Evo Morales prefers to have friends who do not like the United States.”

Morales has such a friend in Hugo Chavez, the president of Venezuela who rolled out the welcome mat for Ahmadinejad in Latin America, experts say.

Together, the three countries are working to build a power bloc that does not include the United States.

“Chavez once called it the ‘Axis of Annoyance’ – annoying the U.S. in their back yard,” said Farideh Farhi, an Iran expert and lecturer at the University of Hawaii at Manoa.

Iran is investing in projects – such as the milk factory and hospital- that boost the country’s appeal among everyday citizens. But while working-class Bolivians benefit from their country’s friendship with Iran, outsiders remain skeptical of how much Iran is actually doing and why.

“What’s always lacking is a sense of reality behind the photo ops and state pledges in help and development,” the Wilson Center’s Arnson said. “The million-dollar question is: ‘Besides the PR boost that countries get from engaging with each other, what are the material benefits that each country gets, and should the U.S. be concerned?’ “

Coster reported this article on a grant with the International Reporting Project.

DPA: A German businessman was jailed Monday for six...

EXCLUSIVE: Iraq Weapons — Made in Iran?