Reuters: French oil major Total will not invest in Iran because the financial terms are poor, not because of increasingly tough sanctions, Chief Executive Officer Christophe de Margerie said on Friday. 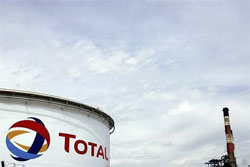 Total has negotiated on and off for years, unsuccessfully, to close a multibillion-dollar deal to develop gas fields in Iran, which holds the world’s second-largest gas reserves. But those talks have effectively come to a halt this year, with Chinese companies swooping in to fund projects.

But Total and other European oil firms have still resisted growing pressure to completely end all business with Iran, despite Washington’s drive to isolate Tehran over a nuclear programme the West suspects is aimed at making bombs.

“At the time, we will not invest in Iran. It is not because of embargoes but because the terms are not good,” de Margerie told reporters in New York. Oil companies have for years complained that Iran’s negotiators drive too hard a bargain.

“Instead of improving terms for investors, they (Iran) are becoming more aggressive. So the environment is not right… We will keep our relationship with Iran at a technical level so we could be there someday. …. The world will need Iran’s oil and gas.”

Total has said before that it would keep its business in Iran “to a minimum”, and has halted the sale of refined fuels to the OPEC member. But it continues to import crude from OPEC’s second-largest producer.

On oil prices, de Margerie warned that prices above $100 would be bad news, and could have a bigger impact on the economy than is widely believed. Oil traded near $89 a barrel on Friday after topping $90 for the first time in two years.

“Also $70 to $80 dollar barrel oil, to be honest, starts to look a little low to invest in difficult regions of the world. $70 is not enough,” he said.

Many OPEC ministers have said they believe a price between $70 and $90 a barrel is comfortable for consumers and sufficient to fund new production. OPEC ministers meet in Quito this Saturday where they are expected to maintain output quotas. (Reporting By Joshua Schneyer; Editing by Marguerita Choy)

AP: With the uproar over North Korea's missile tests,...

Iran unmoved by threats on its atomic program