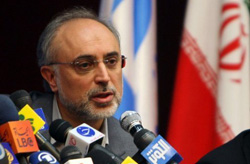 Salehi, also Iran’s nuclear chief, made brief welcoming remarks for the participants of the gathering as Iran handed over the rotating presidency of the Economic Cooperation Organisation (ECO) to Turkey.

Meeting at an Ottoman palace at the bank of the Bosphorus, foreign ministers and senior officials from the 10 member states were to prepare the ground for Thursday’s summit of their leaders, to be attended also by Iranian President Mahmoud Ahmadinejad.

Salehi was appointed foreign minister last week after Ahmedinejad sacked Manouchehr Mottaki due to an apparent falling out over nuclear policy.

The visit of the Iranian pair comes ahead of a second round of talks between Iran and the 5+1 group of world powers over Tehran’s nuclear programme, to be held in Istanbul next month.

Efforts to end the row will be “naturally” on the agenda of bilateral talks between Turkish and Iranian officials on the sidelines of the ECO summit, a Turkish diplomat said.

Turkey’s Islamist-rooted government has established close ties with Tehran, insisting on a diplomatic solution to the nuclear row and reluctant to back a tougher line against the Islamic republic, its eastern neighbour.

In May, together with Brazil, it hammered out a nuclear fuel swap deal with Iran but the United States dismissed the accord.

The following month, Turkey refused to back fresh sanctions against Tehran, adopted at the UN Security Council, insisting that the swap deal should be given a chance.

Its “no” vote irked the United States and raised concern that NATO’s sole Muslim-majority members is sliding away from the West.

Protests break out in Iran capital against election candidate

Iran says Europe has no right to freeze its assets

Reuters: Europe has no right to freeze Iran's overseas...