AFP: Two German reporters arrested for interviewing the son and lawyer of a woman sentenced to death by stoning were preparing on Saturday to return home after being freed with a $50,000 fine, state media announced. 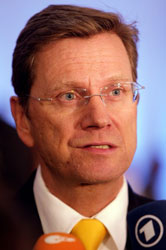 TEHRAN (AFP) — Two German reporters arrested for interviewing the son and lawyer of a woman sentenced to death by stoning were preparing on Saturday to return home after being freed with a $50,000 fine, state media announced.

“The two accused detained in Tabriz have been released and are departing for their home country,” said Malek Ajdar Sharifi, the judiciary chief of East Azerbaijan in northern Iran, quoted by the official news agency IRNA.

An Iranian court sentenced the journalists to 20 months in prison for acting against “national security” but then commuted the sentence to fines of around 50,000 dollars (36,500 euros) each, ISNA news agency said.

They work for Bild am Sonntag and were arrested on October 10 in the northwest city of Tabriz after interviewing the son and lawyer of Sakineh Mohammadi Ashtiani, whose death sentence by stoning for adultery drew widespread international condemnation.

Quoting a judiciary statement, ISNA said trial hearings were held for the two. After “examining the accusation of acting against national security, they were sentenced to a 20-month jail term,” it said.

“But because of their special situation and, it is clear that they were used by one of the others accused in this case, it was felt that they deserved Islamic compassion,” the statement read.

It said the verdicts were commuted to fines instead. The two Germans later on Saturday arrived in Tehran from Tabriz and refused to comment to media.

Westerwelle went straight to the Iranian presidency after his arrival, where he was to be received by Mahmoud Ahmadinejad.

He was also to meet his Iranian counterpart, Ali Akbar Salehi, and hold a joint news conference later in the evening, Iranian media reports said.

Westerwelle was then expected to leave the Islamic republic with Hellwig and Koch.

At the end of January, Iran’s Mehr news agency quoted prosecutor general Gholam Hossein Mohseni Ejeie as saying the journalists had entered the Islamic republic as tourists and been arrested because they were in fact reporters.

“They have accepted that their work was illegal,” he said.

Iran had accused the Germans of having links with an “anti-revolutionary group,” and said they had not obtained a special government permit to work in the country, usually required of foreigners.

At the end of December, Iranian authorities allowed the pair to meet relatives who travelled to Tabriz after repeated requests from the German government. State television broadcast footage of the encounter.

Westerwelle later thanked his Iranian counterpart for his “support” over the detention of the journalists.

Mohammadi Ashtiani has been sentenced to death by two different courts in Tabriz — where she is also detained — in separate trials in 2006.

Her sentence to hang for her involvement in her husband’s murder was commuted to a 10-year jail term by an appeals court in 2007.

But a second sentence to death by stoning on charges of adultery levelled over several relationships, notably with the man convicted of her husband’s murder, was upheld by another appeals court the same year.

She told reporters in January that she planned to sue several people — including the German reporters — for “disgracing” her.