AFP: US Secretary of State Hillary Clinton said Wednesday that Iran is directly or indirectly communicating with opposition groups in Egypt, Bahrain and Yemen in a bid to shape events there. 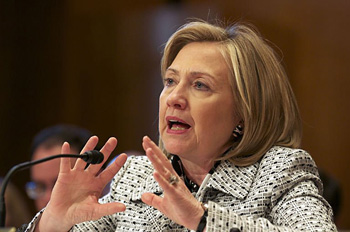 WASHINGTON (AFP) — US Secretary of State Hillary Clinton said Wednesday that Iran is directly or indirectly communicating with opposition groups in Egypt, Bahrain and Yemen in a bid to shape events there.

It was the first time that Clinton detailed alleged efforts by Iran to meddle in the three-month wave of Arab revolts that has toppled presidents in Tunisia and Egypt, convulsed Libya and shaken Yemen, Bahrain and Oman.

“They are doing everything they can to influence the outcomes in these places,” Clinton told the Senate Appropriations Committee.

“So either directly or through proxies, they are constantly trying to influence events. They have a very active diplomatic foreign policy outreach,” she added.

In a bid to counteract the Iranian moves, she said, the United States is making diplomatic and other contacts of its own with opposition groups across the Middle East and North Africa.

Clinton said it was a delicate task.

“Most people want us to be helpful but they don’t want us to be taking a leading role, and so how we deliver on the aid they’re seeking without looking as though we’re trying to take over their revolution is our challenge,” she said.

“But it is also a challenge for the Iranians. They don’t have a lot of friends, but they’re trying to curry more friends,” Clinton said.

She said nonetheless “it’s a constant effort on our part” to keep Iranian influence at bay, adding she needed “the resources” to move diplomats and other US officials around to be successful.

Clinton pointed out that Shiite and non-Arab Iran was trying to win influence even though it is not a natural ally of the Muslim Brotherhood, a Sunni Muslim Arab group in Egypt.

However, Iran has long supported Hamas, a radical Sunni Muslim group in Gaza, which neighbors Egypt.

Analysts told AFP that they expected Iran to try to spread its influence among the restive Shiite majority in the Gulf Arab state of Bahrain, which is governed by a Sunni Arab minority.

However, Patrick Clawson, an analyst at the Washington Institute for Near East Policy, said Bahrain’s Shiite community tended to look more to local leaders than to Iran.

Defense Secretary Robert Gates said Tuesday that the example of mostly peaceful uprisings in Arab countries posed a problem for Iran that might become more acute over time.

“Because the contrast in the behavior of the militaries in Tunisia and in Egypt, and — except for a brief period of violence — in Bahrain, contrast vividly with the savage repression that the Iranians have undertaken against anybody who dares to demonstrate,” Gates said.

AFP: Iran withdrew Thursday its bid for a seat...

Journalist and weblogger sentenced to 14 years in prison