Wall Street Journal: White House concerns that Iran’s hand is being strengthened by recent events in the Middle East is central to its response to the turmoil, say U.S., European, and Arab officials.

White House Eyes Islamist State While Strategizing in Libya, Bahrain, Yemen and Syria; But Its Approach Could Backfire. 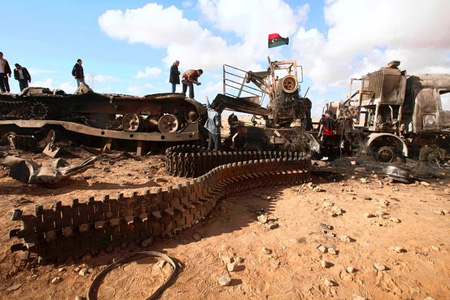 WASHINGTON—White House concerns that Iran’s hand is being strengthened by recent events in the Middle East is central to its response to the turmoil, say U.S., European, and Arab officials.

President Barack Obama’s decision last week to use military force against Libyan leader Moammar Gadhafi’s forces was made in part by his administration’s fear that Western inaction could further embolden Tehran, these officials say.

Sunni-majority Saudi Arabia and Iran’s Shiite government are locked in a battle for regional influence.

U.S. military planners are also concerned Iran could benefit from an overthrow of the monarchy in Bahrain, home to U.S. naval operations that help control the Persian Gulf’s oil flow.

In Yemen, too, Washington’s closest Arab allies, in particular Saudi Arabia, are worried the potential overthrow of President Ali Abdullah Saleh could strengthen Iran in the region.

“Everything the U.S. is doing to respond in the Middle East is colored by how this could hurt or help Iran,” said a European official who has met with senior U.S. officials in recent weeks. “This might be an overreaction, but it’s how people are viewing things.”

Many Middle East analysts warn that Washington’s Iran strategy could backfire. Tehran and its allies have been saying the Obama administration’s varying approach to each uprising in the region is hypocritical, in particular its lukewarm condemnation of the Bahrain government’s recent crackdown on a largely Shiite protest movement.

An overthrow of Bahrain’s Sunni monarchy would likely produce a government more aligned with Tehran’s interests.

“I ask some in the Arab and Islamic worlds: Why have you remained mum over the tyranny against our people in Bahrain,” Hassan Nasrallah, the head of Lebanon’s Hezbollah party and a close Iran ally, said on Saturday. “Is it only because they are Shiites?”

Iran’s leadership has sought to cast the Middle East’s democratic wave as one that targets pro-American governments. But the turmoil has also rekindled a protest movement in Iran—the antithesis of a pro-U.S. government—that flared in 2009 following allegations that national elections were rigged. The White House has sought to cast Tehran as hypocritical—urging on protests in Arab nations, but suppressing them at home.

Over the weekend, Mr. Obama offered his strongest rhetorical support yet for Iran’s youthful opposition movement.

“So far, the Iranian government has responded by demonstrating that it cares more about preserving its own power than respecting the rights of the Iranian people,” Mr. Obama said in a video message that was beamed into Iran and translated into Persian to commemorate Nowruz, the Persian New Year. “These choices do not demonstrate strength, they show fear.”

The U.S. Treasury Department last month for the first time imposed sanctions on Iranian officials solely for their alleged role in human-rights abuses and for playing a role in the crackdown on political dissidents.

The Obama administration is pushing the United Nations’ Human Rights Council in Geneva to censure Iran for its alleged abuses and establish the first U.N. human rights investigator for the Islamic republic in a decade.

Another front in the U.S.’s Middle East approach is Syria, which has been engulfed by political protests in recent days. The Obama administration has aggressively sought to split Syrian President Bashar al-Assad away from his longstanding alliance with Tehran. And it has sought to rekindle peace talks between Syria and Israel over the disputed Golan Heights territory, so far with little luck.

U.S. officials said they are now closely tracking a growing protest movement that has focused on the southern Syrian city of Deraa, which is now viewed as the greatest political challenge to Mr. Assad’s 11-year rule. Human rights-groups said at least half a dozen activists have been killed since Friday. And U.S. officials, while cautious in predicting Mr. Assad will fall, believe the protests could force the 46-year-old leader to limit his cooperation with Tehran.

The Persian Gulf remains the most important flash point in the proxy battle between the U.S. and Iran. “We do expect Iran will attempt to take advantage of events for its own purposes,” said Ben Rhodes, U.S. deputy national-security adviser for strategic communications. “Iran has a long history of attempting to meddle in the affairs of other countries.”

The Obama administration has faced criticism for not more forcefully condemning the move by Bahrain’s ruling Khalifa family and Saudi Arabia to deploy troops against largely Shiite protestors.

Saudi Arabia’s monarchs have told the U.S. they won’t accept a new government in Bahrain that could fall under Iran’s sway.

On Monday, Bahrain’s foreign minister threatened to cut ties with Lebanon over the Hezbollah leader’s criticism of the recent military operations. And Bahrain’s leaders have intensified their claims that Iran is trying to topple their government.

“Iran’s behavior and contacts with some nations and organization about the international affairs of the Kingdom of Bahrain is a clear intervention,” Sheikh Khalid bin Ahmed al-Khalifa told reporters Friday. “I’d like to remind all of you of the incident that had taken place in Iran last year or even before that,” referring to the 2009 protests.

Iran fuel price hikes will be big test for Rouhani

Reuters: Looming fuel price rises in Iran will be...