Four charged in plot to export jet engines to Iran 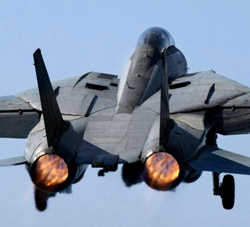 Three of the four — Amparo Echeverry Valdes, 53; Carlos Alfredo Pantoja, 57; and Diego Echeverry, 42 — were arrested and are being held at a Florida detention center, prosecutors in Miami said.

The fourth suspect, Felipe Echeverry, age unknown, is believed to be hiding in Colombia, the Justice Department said. The four suspects belong to the same family.

A federal grand jury in Miami indicted the four “on various counts of illegally attempting to export 22 F-5 jet fighter engines to Iran,” in violation of a US embargo exports to Iran.

According to the indictment, Felipe Echeverry and his three relatives “conspired to sell 22 aircraft engines for $320,000 to an undercover agent and agreed to help the undercover agent to export the engines from Miami to Iran through Panama.”

The defendants negotiated the terms of the purported sale with an undercover US agent in meetings held between January and March, “knowing that the ultimate destination of the fighter jet engines was purportedly Iran.”

The sale was going to be carried out in a three-way operation via Panama, the indictment read.

Iran’s Islamic Republic inherited F-5 jets from the Shah of Iran’s US-equipped air force when he was toppled in 1979.

Currently it produces a variant of the F-5 jet fighter named “Saegeh,” which can use F-5 fighter engines.

If found guilty, the defendants face prison time of between five and 20 years depending on the charges and convictions.

“When unscrupulous dealers look the other way and knowingly agree to sell military-use items knowing they are destined for Iran, they not only break our nation’s laws, but also endanger our national security,” said US Attorney Wilfredo Ferrer.

By Jubin Katiraie The US vowed to eliminate in...