AFP: Gulf Arab foreign ministers were to meet Sunday in the Saudi capital to discuss Iranian interference after Arab world unrest spilled over into some of the region’s Western-backed monarchies. 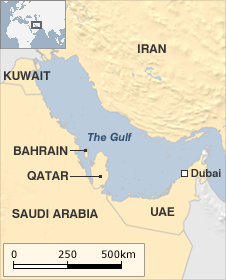 RIYADH, April 3, 2011 (AFP) – Gulf Arab foreign ministers were to meet Sunday in the Saudi capital to discuss Iranian interference after Arab world unrest spilled over into some of the region’s Western-backed monarchies.

Abdullatif al-Zayani, the Gulf Cooperation Council’s new secretary general, condemned “Iran’s meddling in the internal affairs of GCC countries” on the eve of the meeting, saying it “threatened security and stability in the region”.

The Iranian parliament’s foreign affairs and national security committee had said on Thursday that “Saudi Arabia should know it’s better not to play with fire in the sensitive region of the Persian Gulf.”

But the conservative Sunni monarchy on Sunday slammed what it described as an “irresponsible” statement containing “void allegations and blatant offense against the Kingdom of Saudi Arabia.”

“While we are witnessing numerous blatant Iranian interventions in the region’s affairs,” Iran “accuses the kingdom of interventions.”

In addition to Saudi Arabia, Bahrain and Kuwait, the GCC groups Oman, Qatar, and the United Arab Emirates.

Iran’s foreign ministry said Sunday the tension between Tehran and Arab neighbours was the result of a “Western and Zionist conspiracy” aimed at “sowing discord between Islamic countries.”

“We advise regional governments to heed the demands of their people in order to stop such conspiracies,” said ministry spokesman Ramin Mehmanparast, while insisting “unity” among Muslims was the key issue for Iran.

Demonstrators in Bahrain appeared to have been inspired by uprisings in Tunisia and Egypt where protests succeeded in ousting the strongmen leaders.

Protests also spread to the normally placid sultanate of Oman where demonstrators demanded better living conditions, without challenging the rule of Sultan Qaboos who has been in power since 1970.

A call for a nationwide protest in the Saudi kingdom last month, however, did not materialise.

Riyadh responded Friday to Iran’s warning by slamming Tehran for “fuelling confessional tensions (in the region) and failing to respect the norms of good neighbourliness as in the case of Kuwait where a spy cell has been uncovered.”

Kuwait said Thursday it was to expel an unspecified number of Iranian diplomats for alleged links to a spy ring working for Tehran, reportedly ever since the invasion of Iraq in 2003.

A Kuwaiti court passed a death sentence on three members of the alleged ring, to which Tehran denied any links.

The foreign minister of the United Arab Emirates, Sheikh Abdullah bin Zayed Al-Nahayan, said his Kuwaiti counterpart would brief Sunday’s meeting on the details of the alleged Iranian spy ring.

“Any action (against Iran) must be taken in a collective manner and after a thorough study, and must take into consideration the security and stability of the GCC,” Sheikh Abdullah told Kuwaiti daily Al-Qabas.

He said Iranian behaviour regarding the spy ring would “complicate matters between GCC states and Iran”.

Tension between GCC countries and Shiite Iran had heightened after Manama accused Tehran of meddling in its internal affairs when it slammed Bahrain’s decision to bring in Gulf troops.

The two countries recalled their ambassadors and expelled diplomats.

“We reject (Iran’s) call to withdraw the Peninsula Shield force from Bahrain, and consider it an interference in Bahraini internal affairs,” said Bahraini Zayani in a statement.

“These forces are in Bahrain due to the uncovering of a foreign-backed criminal plot that aimed to shake the security and stability in Bahrain and overthrowing its regime,” he said.

At least 24 people, including four policemen, were killed in a month of unrest in Bahrain.

Iran announces ability to destroy all types of armoured vehicles