US imposes sanctions on Assad, six other Syrian officials

AFP: US President Barack Obama imposed sanctions Wednesday on Syrian President Bashar al-Assad and six top aides over their deadly crackdown on protests, telling Assad to move to democracy or step down. 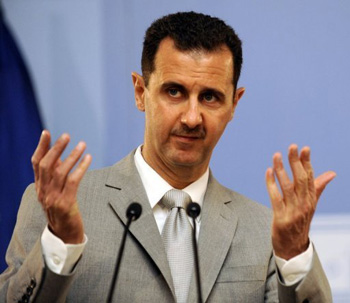 WASHINGTON (AFP) — US President Barack Obama imposed sanctions Wednesday on Syrian President Bashar al-Assad and six top aides over their deadly crackdown on protests, telling Assad to move to democracy or step down.

Obama signed an executive order seeking to “increase pressure on the government of Syria to end its use of violence and begin transitioning to a democratic system that ensures the universal rights of the Syrian people.”

The sanctions block any property the seven have in the United States or any “in the possession or control of US persons in which the designated individuals have an interest,” the document distributed by the State Department said.

In imposing the sanctions, the Obama administration stopped short of saying Assad had lost his legitimacy to rule.

“We are saying that we oppose his behavior and that he needs to stop his policies of repression and mass arrests and begin a political transition that ensures fair representation and democratic rights for Syrians,” the document said.

“We are also saying that Assad is isolating himself from the international community due to his egregious actions,” it said.

“It is up to Assad to lead a political transition or to leave,” it added.

Assad had been spared sanctions until now, two months into the protests that were inspired by other pro-democracy movements sweeping the Arab world, including those that have ousted the Egyptian and Tunisian leaders.

More than 850 people are believed to have been killed and another 8,000 arrested since anti-regime protests erupted in mid-March, according to rights watchdogs.

Also named in Obama’s executive order enshrining the sanctions were Ali Mamluk, director of Syria’s Intelligence Directorate, and Atif Najib, the ex-head of intelligence in Daraa province, the epicenter of the recent political violence.

In parallel actions, the US Treasury Department imposed sanctions on two Iranian Islamic Revolutionary Guard (IRGC) commanders for the role they have allegedly played in supporting the crackdown by ally Syria.

One was identified as Qasam Soleimani, commander of the IRGC-Quds Force (IRGC-QF), which a Treasury document said is “the conduit for Iranian material support to the” Syrian Government Intelligence Directorate (GID).

The other is Mohsen Chizari, a senior IRGC-QF officer who serves as the commander of the IRGC-QF Operations and Training, the Treasury said.

Makhluf is a senior official of the GID who was allegedly “heavily involved” in the crackdown in Daraa, the Treasury said.

The Treasury slapped sanctions on Cham Holding — and its chairman Nabil Rafiq al-Kuzbari — as well as Bena Properties and Al Mashreq Investment Fund for its links to Rami Makhlouf, described as a powerful Syrian businessmen and regime insider.

Obama’s “strong and principled action today should send an unmistakable message that the United States stands in solidarity with the brave protesters in Syria and that the Assad regime has lost legitimacy in our eyes,” they said.

They urged the European Union to join the United States in targeting Assad.

By Jubin Katiraie A 13-year-old Iranian girl was beheaded in...

Bloomberg: Oil rose to the highest level in four...