12 dead in Iran arms blast at Cyprus naval base

AFP: Huge blasts in a seized Iranian arms cache at a Greek Cypriot naval base in southern Cyprus killed at least 12 people on Monday, triggering power and water outages at the height of the summer. 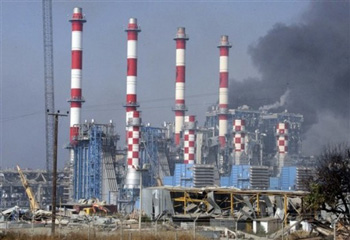 MARI, July 11, 2011 (AFP) – Huge blasts in a seized Iranian arms cache at a Greek Cypriot naval base in southern Cyprus killed at least 12 people on Monday, triggering power and water outages at the height of the summer.

In what Commerce Minister Antonis Paschalides called a “tragedy of Biblical dimensions” for the small Mediterranean island, the explosions devastated the adjacent Vassiliko power station.

The plant accounts for almost 60 percent of supply.

The blasts also caused massive damage to homes in the nearby village of Mari, forcing the evacuation of its population of 150 people, its mukhtar or headman, Nikos Asprou, told AFP.

Government spokesman Stefanos Stefanou said 62 people were injured, two of them seriously, announcing three days of official mourning with flags on state buildings to be flown at half-mast.

The defence ministry had held talks last week about the storage conditions after National Guard chiefs reportedly expressed concerns about them being kept in the open as temperatures touched 40 degrees Celsius (104 Fahrenheit).

“Decisions were taken on protecting the material but unfortunately this was not possible as time ran out,” Stefanou said, promising a “thorough investigation”.

The official CNA news agency said the death toll of 12 killed could rise as a number of people were posted as missing at the blast site which had been reduced to scorched earth.

Five firefighters were among the dead, who also included four Guard members and two sailors. There was no immediate word on the identity of the other victim.

An AFP correspondent saw magazine casings, shrapnel and other debris from the explosion littered throughout the village of Mari. Windows and doors were blown in, some roofs had collapsed and structural damage was widespread.

Debris was hurled as far as three kilometres (two miles) from the site of the blast in the Evangelos Florakis naval base between Mari and the fishing village of Zygi to the west, the correspondent reported.

Hundreds of trees on nearby hillsides were flattened by the force of the blast and several of the generator buildings and fuel tanks at the Vassiliko plant were reduced to shells.

Virtually every window was blown in Zygi, a village whose seafront fish restaurants are popular with locals and tourists to the resort island.

The main motorway connecting Nicosia with the island’s second-largest city Limassol runs less than a kilometre (half a mile) from the Vassiliko plant and passing motorists reported seeing debris flying through the air.

Prior to handing in his resignation, Tsaliklides had told public radio the blasts struck among containers of Iranian munitions seized from Cypriot-flagged vessel M/V Monchegorsk in 2009.

It was intercepted in the eastern Mediterranean en route to Syria in January that year and, after repeated searches, its cargo was eventually seized.

A UN Security Council panel concluded that March that the shipment was in clear violation of an arms embargo against Iran under UN sanctions imposed over Tehran’s controversial nuclear programme and the weapons were put into storage.

“I want to express my sympathy and condolences to the families of the people who died while selflessly performing their duty,” he said. “The material damage can be repaired, but lives do not come back.”

The chairman of the Electricity Authority of Cyprus, Charis Thrassou, warned that it would take a long time to repair the Vassiliko plant and added that an emergency rationing plan would be put to ministers.

The loss of power supply also prompted the closure of the island’s desalination plants which had allowed the gradual abandonment of summer water rationing over the past two years.

The Nicosia Water Board announced that as a result consumers in the capital would be supplied with water for just 12 hours in every 48.

At the island’s main international airport in Larnaca, morning flights were severely disrupted. When they returned to usual, passengers were forced to cope with severely reduced air conditioning in the terminals.

There was no immediate word on any damage to naval vessels at the Evangelos Florakis base but officials who visited spoke of a scene of “devastation”.

The defence ministry in Greece said it would fly a team of explosives experts to Cyprus on Monday to aid investigations following a request from the government in Nicosia.

Reuters: Iran's foreign minister will visit India in the...

BBC: The future of the UK's Trident missile deterrent...