Wall Street Journal: A group of nearly 1,000 American victims of international terrorism is suing Clearstream Banking SA of Luxembourg, a unit of Germany’s Deutsche Börse AG, for allegedly assisting Iran in fraudulently securing the release of $250 million in frozen assets and in moving it out of the U.S. financial system, according to legal documents recently unsealed by a federal court in New York. 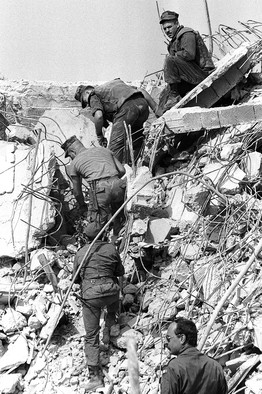 WASHINGTON—A group of nearly 1,000 American victims of international terrorism is suing Clearstream Banking SA of Luxembourg, a unit of Germany’s Deutsche Börse AG, for allegedly assisting Iran in fraudulently securing the release of $250 million in frozen assets and in moving it out of the U.S. financial system, according to legal documents recently unsealed by a federal court in New York.

The plaintiffs—family members of the 241 U.S. servicemen killed in the 1983 bombing of a Marine Corps barracks in Beirut—are seeking the funds as partial payment of the $2.7 billion that a federal judge in 2003 ordered Iran to pay the victims of the bombing. The judge ruled that Tehran had orchestrated the attack, at the time the largest terrorist act ever committed against U.S. citizens. Iran has denied any role in the bombing.

The plaintiffs, according to records at the U.S. District Court for the Southern District of New York, allege that in 2008 Clearstream and a second financial institution helped Iran move the money out of accounts at Citigroup Inc.’s Citibank unit in New York after a federal court had ordered the funds frozen. The plaintiffs say Clearstream and the second bank fraudulently masked Iran’s control of the accounts as a means to win the release of the money.

The name of the second financial institution has been redacted from the unsealed documents. The case was sealed by a judge both for U.S. national-security reasons and to respect Luxembourg bank-secrecy laws.

“The foregoing transfers were made…in a deliberate attempt to stave off creditors by putting property in such a form and place that Iran’s creditors could not reach it,” the plaintiffs alleged in the court filing.Perles Law Firm P.C. is one of the firms representing the plaintiffs.

A Clearstream representative said Monday that the company doesn’t comment on ongoing litigation. But Clearstream said in court filings that the money held at its accounts at Citibank was Clearstream’s property, and not Iran’s.

Deutsche Börse, in its 2010 annual financial report, briefly referred to the lawsuit and said Clearstream would fight any efforts to seize the money. Clearstream “intends to defend itself vigorously to the fullest extent,” Deutsche Börse wrote. The company said in the annual report that Clearstream was first notified of the lawsuit in January.

The Clearstream representative said the company began closing the accounts of its Iranian customers in late 2007 “in light of the political environment at the time.”

The U.S. District Court for the Southern District of New York initially ordered Citibank in June 2008 to freeze $2.25 billion of Clearstream accounts that the plaintiffs alleged were controlled by Iran. The funds were largely made up of debt instruments rather than cash, according to court documents. Clearstream’s lawyers submitted records that argued $250 million of the frozen $2.25 billion didn’t belong to Iran, and the following month a judge ordered Citibank to release the funds. The plaintiffs are now alleging that the information provided by Clearstream and the second bank was fraudulent.

“Had Citibank been so informed, those bonds would continue to remain in the custody of Citibank in New York and be available for enforcement of the judgment,” the plaintiffs said in the court filing. Roughly $2 billion remains frozen at Citibank, and the claimants and Clearstream continue to fight for control of the funds at the Southern District Court of New York. That asset seizure, if proved to be Iran’s money, would mark the biggest confiscation of Iranian assets abroad since the 1979 Islamic revolution.

The federal court ordered the freezing of the $2.25 billion in 2008, in part, because of information provided by the U.S. Treasury Department. Both the Barack Obama and George W. Bush administrations have conducted an elaborate financial war against Iran in a bid to force Tehran to give up its nuclear program. Washington fears Iran is developing nuclear weapons, a charge Tehran has repeatedly denied. Extensive U.S. sanctions seek to bar Iran from use of the U.S. financial system.

Clearstream, primarily a clearinghouse for financial trades, specializes in managing transactions for governments. The company says it provides services to more than 60 central banks globally.

Deutsche Börse is currently in negotiations to take over NYSE Euronext Inc., which operates the New York Stock Exchange. Some U.S. lawmakers have raised the allegations against Clearstream as a reason that the U.S. government should question Deutsche Börse’s suitability to take over the NYSE.

“Are you concerned that the New York Stock Exchange is going to be owned by a company that’s allegedly, and I think is, conducting business with Iran?” U.S. Rep. Steve Austria (R., Ohio) asked Treasury Secretary Timothy Geithner at a congressional hearing this year. Mr. Geithner declined to comment.

—John W. Miller in Brussels contributed to this article.

Russia says no to any Iran deal sidelining it

AFP: Russia said Friday that it would not accept...

AFP: Iran has made a proposal to Moscow to...