Philadelphia Inquirer: The undercover Homeland Security agent and a California man huddled over a late lunch at a Center City restaurant on Jan. 4, 2010, speaking in hushed tones of bravado, profanity, and greed. 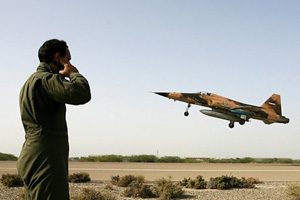 The undercover Homeland Security agent and a California man huddled over a late lunch at a Center City restaurant on Jan. 4, 2010, speaking in hushed tones of bravado, profanity, and greed.

The undercover buyer warned, “You know, some of this stuff might end up in Iran.”

U.S. Air Force and Navy pilots would think it a very big deal, say federal prosecutors involved in an eight-month sting that culminated last year when Knapp tried to deliver an F-5.

The F-5, although not the most modern jet fighter, “can be used to simulate a U.S. aircraft attack profile, enabling the Iranian Air Force to practice different scenarios to accomplish the goal of downing one or two U.S. aircraft,” prosecutors said.

The jet Knapp intended to sell the undercover agent was owned by a wealthy Californian who often leased it as a prop to Hollywood movies.

Knapp has since pleaded guilty to violating the Iranian arms embargo and is to be sentenced Monday in federal court in Wilmington. He faces a likely sentence of between 21/2 and five years.

The government recordings, which prosecutors filed last week after Knapp’s lawyer tried to downplay the significance of his client’s military sales, include at least one statement the government says reveals a motive other than money.

“As more and more time goes on, I’m starting to hate the U.S. more and more,” Knapp said during a portion of the sting that took place in Budapest, Hungary, in April 2010. The agents had led Knapp there to meet a man they said was an Iranian intermediary.

During the sting, Knapp was also recorded saying he understood why Iran was trying to beef up its air force – for a potential clash with the United States. “There’s just a lot of chatter about going to war with them and I don’t like it.”

Knapp’s defense lawyer, Christopher S. Koyste, said in a court filing that much of his client’s words were mere “puffing,” tough-guy sales talk designed to match the kinds of things he thought an arms dealer might say during negotiations.

Knapp, who had been laid off from an $81,000-a-year human resources job, had become financially strapped, the defense lawyer said, and made a desperate, foolhardy decision, the first criminal act of his life.

Koyste argues that although Knapp committed the crimes with which he is charged, the government’s case was exaggerated because the items sold were outdated technology.

The supersonic F-5, mass-produced in the 1960s, is still used by 27 mostly developing countries, including Iran, and can carry Sidewinder missiles, according to globalsecurity.org. Reuters reports that the F-5 is one of several fighters Iran has been using in war games now under way.

Assistant U.S. Attorneys David L. Hall and Robert F. Kravetz said Knapp’s crimes were calculated and serious because they included multiple sales over eight months. The prosecutors said Knapp believed the avionics and plane were being sold to Iran, an enemy of the United States, and, as Knapp said, that the equipment would help “level the playing field.”

“Puffing connotes words without action – in this case, Knapp took action,” the prosecutors said. Officials said he delivered the flight suits overseas, sent an ejector seat to the East Coast, and devised plans to have the F-5 shipped from California to New Castle, Del., and then on to Iran.

“He brought up the idea of selling items to Iran without being prompted,” the prosecutors said. “He researched and proposed the idea of equipping Iran with squadrons of fighter jets.”

Knapp was arrested in Wilmington in July 2010, shortly after a recorded conversation with the undercover agent about final preparations. They talked about how to pack and ship the F-5 to avoid customs scrutiny, as well as future deals and the prison time they’d face if they got caught.

“I know the risk,” Knapp said at one point. “I know that it’s deadly serious.”

The undercover agent gave Knapp a last chance to back out. “You’re not under any pressure . . . I’ve told you many times you can leave and walk away. But you’re in this – in for the penny, in for the pound, as they say, right?”