United States and its allies expand sanctions on Iran

New York Times: Major Western powers took significant steps on Monday to cut Iran off from the international financial system, announcing coordinated sanctions aimed at its central bank and commercial banks. The measures, a response to a recent United Nations report warning about Iran’s nuclear activities, tighten the vise on Iran but still fall short of a blanket cutoff. 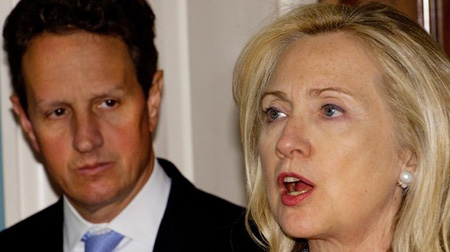 WASHINGTON — Major Western powers took significant steps on Monday to cut Iran off from the international financial system, announcing coordinated sanctions aimed at its central bank and commercial banks. The measures, a response to a recent United Nations report warning about Iran’s nuclear activities, tighten the vise on Iran but still fall short of a blanket cutoff.

The United States also imposed sanctions on companies involved in Iran’s nuclear industry, as well as on its petrochemical and oil industries, adding to existing measures that seek to weaken the Iranian government by depriving it of its ability to refine gasoline or invest in its petroleum industry.

The United States, Britain and Canada each announced measures aimed at shutting off Iran’s access to foreign banks and credit. The European Union is expected to approve similar measures on Thursday, in what amounts to a concerted response to the finding this month by the United Nations’ International Atomic Energy Agency that Iran may be continuing to work on a nuclear weapon and delivery system.

The Treasury Department named the Central Bank of Iran and the entire Iranian banking system as a “primary money laundering concern” — an unusual and symbolically important step, but one that is short of formal sanctions, which would probably be resisted by China and other Asian countries that import oil from Iran. The Obama administration is also worried that such a step could drive up oil prices while the economy is fragile.

Still, the administration sought to portray the measures as a major increase in pressure on Iran’s leadership, which they called on to return to the bargaining table over its nuclear program.

“The message is clear,” Secretary of State Hillary Rodham Clinton said in announcing the steps. “If Iran’s intransigence continues, it will face increasing pressure and isolation.”

Treasury Secretary Timothy F. Geithner, standing next to her, said the United States had not ruled out formally sanctioning the central bank, a step that would have a more draconian effect on Iran because it would cut off from the American market any foreign bank that does business with the central bank.

Mr. Geithner insisted that simply labeling Iran’s banking system as a risk for money laundering would cause foreign banks to think twice about dealing with it. With the American, British and Canadian actions, he said Iran was effectively cut off “from three of the world’s largest financial sectors.”

President Nicolas Sarkozy of France, who has taken a particularly aggressive line toward Iran, called Monday for major powers to freeze the assets of the central bank and suspend purchases of Iranian oil.

For all the tough talk, some analysts predicted that the measures would do little to stop Iran from its pursuit of a nuclear capability.

“The fact that they don’t have letters of credit, the fact that they don’t have access to state-of-the-art Western technology is great,” said Danielle Pletka, an expert on sanctions at the American Enterprise Institute. “But you have to ask, were we able to impose crippling sanctions that Secretary Clinton once talked about, would we get ahead of them in their development of a nuclear program?

China, Japan and other countries use Iran’s central bank to process transactions from their purchases of Iranian oil, in part because most of Iran’s major commercial banks are already subject to sanctions. They would be likely to resist an order to stop dealing with the central bank, and this would put the administration in an untenable position, since the United States could not sever its ties with Chinese or Japanese banks.

Mr. Obama could request a waiver to exempt such institutions from the ban, but experts on sanctions said that such a waiver would undermine the credibility of the United States. The White House has been under pressure from Republicans to designate the central bank, and has worked to forestall such legislation.

The administration has telegraphed its intention to seek further sanctions against Iran since the publication of the nuclear agency’s report. The White House pushed the agency to be as detailed as possible in its evidence of Iran’s nuclear activities as a way of building international support for sanctions. But Russia and China both pushed back, with Russia arguing that diplomacy is still the best course.

Iran reacted angrily to the agency’s report, and renewed its display of displeasure on Monday by not attending a gathering of 97 countries at the Vienna headquarters of the atomic energy agency, which was called to discuss nuclear issues related to the Middle East. Tehran says its nuclear program is solely for peaceful, civilian purposes.

Administration officials said Iran’s economy was suffering badly because of existing sanctions over the nuclear issue. Its oil and gas industry, they said, is short of capital and technology, with most foreign investors having left the country. The new steps are the first time that the United States has taken aim at the petrochemical industry, which is the second largest source of revenue for the Iranian government, after oil.

Analysts said the latest measures would intensify that pressure, but warned that changing Iran’s behavior would require patience.

“We’re trying to do two things: stress the Iranian economy as a means of impacting the Iranian decision makers’ attitude, and using sanctions and other tools to slow the nuclear program,” said Ray Takeyh, an expert on Iran at the Council on Foreign Relations. “It’s a long-term proposition.”