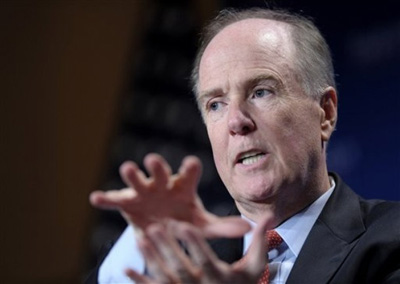 The official, Thomas E. Donilon, predicted that the next blow to Iran would come with the fall of its major regional ally, President Bashar al-Assad of Syria, who is himself increasingly isolated as he battles a popular uprising.

“Having actively funded the regime’s brutality and the killing of its own people, Iran will be discredited in the eyes of the Syrian people and any future government,” Mr. Donilon said in a closely monitored speech at the Brookings Institution. “Iran’s isolation from the Arab world will have deepened.”

Noting that President Assad had been scorned by the Arab League and abandoned by Turkey’s leader, Prime Minister Recep Tayyip Erdogan, Mr. Donilon said the Syrian leader’s time was running out. He even referred to Mr. Assad’s administration as the “Assad group,” which made it sound less like a government than a gang.

Since taking over as national security adviser 13 months ago, Mr. Donilon has emerged as one of the most influential foreign-policy voices in the administration. And with the departure next month of another senior adviser, Dennis B. Ross, Mr. Donilon is taking direct control of the delicate Iran portfolio.

Answering critics of the administration, he dismissed fears that the withdrawal of the last American troops from Iraq next month would open the door to rising Iranian influence. The Iraqi people, he said, hold deeply unfavorable impressions of Iran, even those who support political groups backed by Tehran.

“Iran has failed in its effort to shape Iraq into a client state in its own image,” said Mr. Donilon, adding that the United States would maintain a “long-term strategic partnership” with Iraq after the troops leave.

Kenneth M. Pollack, director of the Saban Center for Middle East Policy at Brookings, said he did not dispute that characterization. But he added that if cornered, Iraq’s Shiite population “will inevitably fall back on the Iranians, not because they like them, but because they have no one else to turn to.”

On Monday, the United States and its allies announced coordinated sanctions that aimed to sever Iran’s access to the international banking system, but that still fell short of a total cutoff. The United States imposed separate sanctions against Iran’s petrochemical industry, and further measures against its oil industry.

The steps showed both the progress of the administration’s efforts to rally global support and the hurdles still ahead. Russia and China have refused to impose additional measures, leaving the effort less a worldwide campaign than a Western one.

“They’ve been very good partners, frankly,” Mr. Donilon said, when asked about the lack of unity, but he did not elaborate.

He also did not say whether he believed that Iran could be prevented from making a nuclear weapon, a goal the International Atomic Energy Agency said in a recent report the Iranians could be actively pursuing.

Still, in making the case for Mr. Obama’s strategy, Mr. Donilon said that sanctions had slowed down Iran’s progress. Citing the atomic energy agency’s report, he said Iran currently had about 6,000 working centrifuges, which are used to enrich uranium to weapons grade, far fewer than the 50,000 centrifuges that the head of Iran’s atomic energy organization predicted in 2007 that Tehran would have by 2011.

He cited the high cost and difficulty Iran had in obtaining equipment to run its uranium enrichment program, though he made no mention of covert efforts to sabotage the program, like the computer worm Stuxnet, a cyberattack that may have had the involvement of both the United States and Israel.

As for Iran’s broader economy, Mr. Donilon said the sanctions had brought it to a virtual standstill, with an inflation rate of 20 percent, high unemployment and “negligible growth,” despite high oil prices. The growing economic sway of the Islamic Revolutionary Guard Corps is a further cause of frustration, he said.

Mr. Donilon pointed to growing fissures within the Iranian leadership, noting that the supreme leader, Ayatollah Ali Khamenei, and President Mahmoud Ahmadinejad “seem increasingly headed toward a confrontation over the direction of the country.” On Monday, a top adviser to Mr. Ahmadinejad was briefly arrested, in what appeared to be a sign of the mounting tensions.

Mr. Donilon made no mention of recent reports that Israel was considering a military strike on Iran’s nuclear facilities — something that has privately concerned officials. But he repeated the administration’s position that the United States would take no options off the table in dealing with Tehran.

“Pressure is a means not an end, and our policy is firm,” he said. “We are determined to prevent Iran from acquiring nuclear weapons.”

Dozens Arrested in Protest Over the Suspicious Death of Iran Poet

By Pooya Stone Dozens of Arab-Iranians were arrested during...