Daily Telegraph: William Hague has warned Iran that it would face an international backlash if it expelled Britain’s ambassador to Tehran after the Islamic regime ratified legislation to downgrade UK ties.

William Hague has warned Iran that it would face an international backlash if it expelled Britain’s ambassador to Tehran after the Islamic regime ratified legislation to downgrade UK ties. 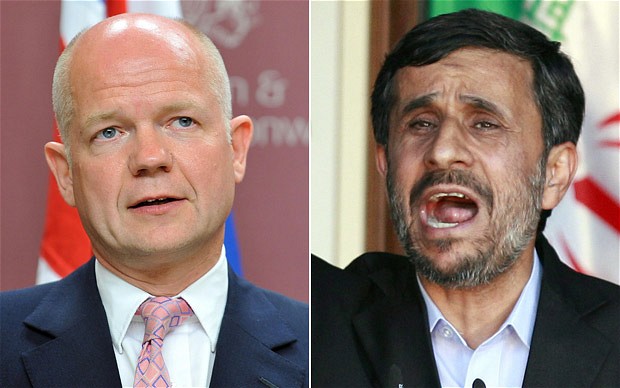 Mr Hague said the expulsion of Dominick Chilcott, who has been in Tehran just one month, would damage its ties with Europe and other Western states.

“If the Iranian government confirms its intention to act on this, we shall respond robustly in consultation with our international partners,” Mr Hague said.

“It will do nothing to repair Iran’s international reputation. To respond in this manner to pressure from the international community to engage is entirely counterproductive and yet another sign of Iran’s continued unwillingness to enter into dialogue.”

The Foreign Ofice was weighing its direct response, as the bill demands relations to be reduced to charge d’affair level but Iran does not have an ambassador in London.

Iran was enraged by the imposition of financial sanctions by the Treasury last week that effectively cut the country’s banking system’s access to the City.

The Guardian Council, the Islamic body that holds ultimate sway over legislation, hurriedly approved a bill passed by parliament as MPs chanted ‘Death to England’.

Downing St said it “regretted” had maintained a hostile approach to international relation. “Clearly we regret their decision to expel our ambassador,” a spokesman said.

“That decision will do nothing to help the Iranian regime address its growing isolation from the international community.”

President Mahmoud Ahmadinejad has five days to sign the bill before Iran’s foreign ministry can act on it.

Mr Chilcott only took up his position at the Tehran Embassy on October 26 and could be returning home after little more than a month in post.

The bill – passed by an overwhelming majority yesterday – requires both Iran and Britain to withdraw their ambassadors from the other country and reduce representation to the level of charge d’affaires.

It also calls for trade between the two countries to be reduced to “minimum levels”.

The EU is due to consider an oil embargo on Iranian experts as well as the imposition of targeted sanctions on 180 Iranian officials in response to a report from UN weapons inspectors confirming Iran has undertaken work to build a nuclear bomb.

However diplomats said the French-backed proposal to impose an oil embargo would not receive Europe-wide support.