Washington Post: Congress is trying to use a little-known certification requirement for ships and drilling rigs as a lever to squeeze Iran’s trade with the rest of the world. 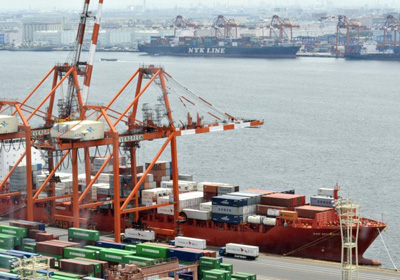 Congress is trying to use a little-known certification requirement for ships and drilling rigs as a lever to squeeze Iran’s trade with the rest of the world.

Facing U.S. pressure, a Norwegian company that certifies vessels is ending its relationship with Iran, where it had provided seals of approval for everything from cargo ships to oil tankers to patrol boats.

Those seals of approval are needed by ships seeking entry into most of the world’s ports, and members of Congress are trying to tighten sanctions on Iran by forcing the certification firms to choose between doing business in the United States or in Iran.

Det Norske Veritas (DNV), a leading ship-certification firm with 18 to 20 employees in Iran, is closing its office there, ending its inspections of Iranian vessels and sending “termination notices” to 15 to 20 international oil rigs that are drilling in Iranian waters with DNV certification.

“Just looking at the political landscape and the political risk, we certainly don’t see it as a growth area, and we don’t want to be doing business with countries that don’t match with our own value statements,” DNV spokesman Blaine Collins said. “So it was time to do this.” He said DNV thinks it has complied with international sanctions.

U.S. lawmakers have seized upon DNV and a handful of similar firms as a new tool for tightening economic screws on Iran because of concern that the Middle East country might be building a nuclear weapon. Over the weekend, Iran’s news agencies said the nation’s military had downed a U.S. surveillance drone, heightening tensions. Oil analysts say worries that sanctions might choke off Iranian supplies are propping up oil prices, which remain above $100 a barrel despite economic weakness in Europe and the United States.

Working on behalf of governments, a small number of firms — known as classification societies — provide certifications, which vessels need to obtain insurance. In the United States, the Coast Guard delegates inspections to these firms.

“Without certification by a respected classification society, it is difficult — if not impossible — for a vessel to secure insurance or gain entry to a major international port,” Sens. Joseph I. Lieberman (I-Conn.) and Susan Collins (R-Maine) said. “In short, without the endorsement of a classification society, a vessel does not have a ‘license to trade’ in the world market.”

The U.S.-based American Bureau of Shipping dropped its classification of vessels owned or operated by the Iranian government in 1979, during the revolution there. In September 2009, the company also dropped its certification of 16 international oil rigs that were drilling in Iranian waters after the U.S. Treasury “clarified its policy” on sanctions “in response to an inquiry from ABS,” the company’s vice president for external affairs, Jean Gould, said in an e-mail.

However, other firms — notably Lloyd’s Register, Bureau Veritas and Germanischer Lloyd — continue to provide services to Iranian and other vessels working in Iranian ports or waters.

“Lloyd’s Register is sensitive to the concerns of the U.S. We will continue to comply with any legislation that is enacted and which is applicable to us,” said Mark Stokes, group communications director for Lloyd’s. But, he added, “we value our independence highly and would hope that any new national legislation would not undermine our global mandate.”

Congress wants to deprive Iran of such certification services, which could limit its trading or at least drive up the cost.

The current markup of the Senate appropriations bill for the State Department and foreign operations would seek to do the same, calling on the secretary of state to come up with steps against noncompliant firms and report back to Congress.

DNV’s Collins said that the moves in Congress “probably sped up that decision-making process” for leaving Iran. Until a month ago, when it began to withdraw, DNV had provided certification for 38 to 40 vessels flying the Iranian flag, he said.

“We actually think we’re ahead of the legislation,” Collins said. “So we have a pretty clear conscience.”

DNV inspects vessels and rigs in the United States on behalf of the Coast Guard. It inspected the Transocean Deepwater Horizon rig, which exploded and sank last year, killing 11 people working on BP’s Maconda well. Later DNV performed the U.S. government autopsy of the blowout preventer from the Macondo well, which spilled about 5 million barrels of crude oil into the Gulf of Mexico.

DNV has also certified oil tankers flagged in Cyprus and Malta and belonging to the National Iranian Tanker Co., which Iran privatized in 2009 but is still seen as close to the government. It owns about 10 percent of the world’s very large crude oil carriers and plans to expand.

DNV has advisory committees for different countries, and its advisory committee for Iran has included three officials from the Islamic Republic of Iran Shipping Lines, a company that the Treasury in 2008 found to be providing logistical services, including shipments of military-related cargoes, to Iran’s Ministry of Defense and Armed Forces Logistics.

The oil rigs currently operating in Iranian waters mostly work for Iranian state-owned companies. The rigs are owned by a variety of foreign firms, including Norway’s Sinvest, London-based Foresight Group, China Oilfield Service, Japan Drilling and Saipem, a subsidiary of Italian oil giant ENI. Industry sources said they would probably be certified by either Lloyd’s or Bureau Veritas. BV did not respond to inquiries.

Lloyd’s List, a publication, on Monday printed articles arguing that tighter sanctions would ratchet up the price of crude oil by threatening Iran’s roughly 2 million barrels a day of exports. About a quarter of that goes to China and about 12 percent to Japan. Refiners in Greece, Italy and Spain receive about 450,000 barrels a day of Iranian crude, according to the U.S. Energy Information Administration, some by ship and some via a pipeline through Egypt.

“Oil prices should be closer to $80 a barrel,” said Fadel Gheit, oil analyst at Oppenheimer & Co. But he said speculation about a supply disruption has probably added about $20 a barrel because of “a combination of Libya, Iran and everything else. The boogeyman. No one knows how big or what shape he’s going to take.”

The Eurasia Group, a political-risk firm, said fears about rising oil prices would end up prompting Western nations to back off from sanctions — including recent European moves to restrict dealings with the Central Bank of Iran — that might hit Iran’s crude exports. “These concerns are overblown, and the actual lasting market impact will probably be limited,” the group said in a recent note.