Reuters: If it were not for the light blue Persian-lettered sign outside, you might mistake Bank Saderat for just another foreign bank operating in the City of London financial centre. 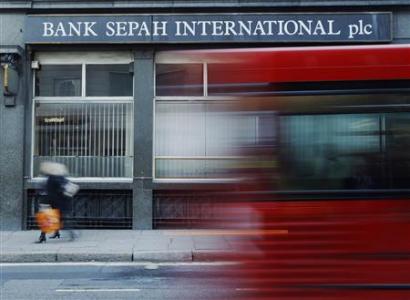 LONDON (Reuters) – If it were not for the light blue Persian-lettered sign outside, you might mistake Bank Saderat for just another foreign bank operating in the City of London financial centre.

Sitting in a grey stone building in the heart of the City, the Iranian-owned bank counts the centuries-old Bank of England among its neighbours.

Saderat is one of a handful of lonely Iranian banking outposts that have managed to hold out in Europe’s financial hub despite escalating tensions with the West over Iran’s nuclear programme.

Hit by international sanctions, the banks linger on, unable to take on new business. The pressure on them is rising. Last month, the UK forbid its banks to do any business with Iranian banks after a new report from a nuclear watchdog highlighted further concerns about the possible military dimensions to Iran’s nuclear programme.

And after an attack on the British embassy in Tehran last month, the UK closed down the Iranian embassy in London.

All that is left now for the banks is to gradually wind down their existing business.

Close to Bank Saderat in the City, the offices of another Iranian bank — Sepah International — are equally inconspicuous. The street sign is faded, and frosted glass obscures its interior.

Inside these banks, little happens. Dwindling numbers of employees are mainly idling their time away.

“Sometimes staff arrive in the morning and can be on the internet for much of the day. I find that extremely frustrating,” said an employee at one London-based Iranian bank, who like others in this story, asked not to be named because they were not authorised to speak to the press.

“We have only got a few items outstanding now and that is why we are being retained,” he said.

Charged by the West with helping to finance an illicit weapons program and militant groups, the banks’ assets are frozen and they are barred from making new loans, allowed only to service those loans made before they were hit with sanctions by the European Union.

Melli sat in 11th-floor offices from which staff had clear views of London’s skyline. Saderat bought its property from its parent company for 10.3 million pounds in 2002, records show.

Things could not be more different now. Over the past three years, Iranian banks in London have seen steep declines in profits and assets, sometimes slashing staff by 80 percent.

The reception area of Persia International, adjacent to Bank Saderat, is spacious and still elegantly decorated, with black leather couches and marble walls.

But a Persia International employee pointed out the bank cut its staff to about 20 from 50 after it was sanctioned in 2010. “It is a shame. It was doing quite well,” he said.

Iran has had bank branches in London since the 1960s, long before the 1979 revolution swept aside a monarchy and brought the country’s Muslim cleric rulers to power.

In the early 2000s, the branches began spinning off as subsidiaries, making it more difficult to prove a direct financial link to Iran.

In recent years, the United States has accused Iran of using its British banks to buy arms and support the militant group Hezbollah.

After multiple investigations, British authorities told US officials in 2008 according to cables released by Wikileaks, they could detect no wrongdoing by the Iranian banks.

“In fact, after being subjected to increased regulatory scrutiny, one of the banks has become the best run bank in the UK,” one of the cables quoted James Robertson, a British Treasury official, as saying to the Americans.

The banks deny the U.S. charges, and three current and former bank employees interviewed for this story said they lent to legitimate Iranian businesses with no ties to the government.

Closing them could be challenged in court, British Treasury officials argued in 2008 meetings with U.S. officials recounted in the leaked cables.

“It is a commercial decision which will be made by the bank on whether they choose to leave,” a British Treasury spokeswoman told Reuters. “The Treasury is not asking them to leave.”

So, though Iran’s embassy in London is now empty, the banks stay open.

But despite their legal status, they endure rigorous checks from British regulators.

A British Treasury official said in a meeting with U.S. officials that regulators were willing “to push the envelope on what they can do to make life difficult for the banks,” according to the Wikileaks cables. In another instance, they said their probing of Iranian banks “borders on bending the law.”

Melli Bank officials did not respond to request for comment, and officials at Bank Sepah, Persia International and Bank Saderat declined to speak to Reuters.

All this means the banks are doomed to years in limbo, unable to close their doors but not fully open them either.

“A banking license in London is very valuable, and I do not think they would want to give that up,” the first bank employee said. “Unless of course the sanctions force it.”

Melli Bank has left its glitzy offices and moved into smaller West London offices far from the City, while Saderat cannot sell its property without permission from the British Treasury.

The couple of dozen employees working on Saderat’s five office floors wait for a trickle of tasks and draw their paychecks from shrinking reserves, hoping things may one day get better.

For those who lose their jobs at Iranian banks, their problems are compounded by a banking sector that has seen thousands laid off in the post-crisis years, making it difficult to find a new position even for those without a blacklisted entity at the top of their CVs.

“If I were not there, I do not know where I would be,” said the first bank employee. “A lot of people are hanging on and seeing what happens.”

Reuters: The head of the U.N. nuclear watchdog, Mohamed...