Reuters: Iranian officials contacted Syria’s Muslim Brotherhood to try to mediate a political solution to a 10-month-old uprising against President Bashar al-Assad but their efforts were rebuffed, a senior Brotherhood member said on Wednesday. 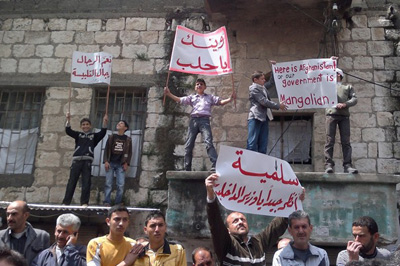 BEIRUT (Reuters) – Iranian officials contacted Syria’s Muslim Brotherhood to try to mediate a political solution to a 10-month-old uprising against President Bashar al-Assad but their efforts were rebuffed, a senior Brotherhood member said on Wednesday.

The unrest in Syria is threatening to slide into civil war as Assad’s forces try to crush a protest movement. In recent months, armed rebels backing the protesters have brought the fight increasingly to security forces.

A senior Muslim Brotherhood member, Melhem al-Droubi, told Reuters that the group had seen no details of the Iranian offer made on December 20 but that it would not deal with Tehran unless it revoked its support for Assad.

“They (Iranian officials) asked about the possibility of the Brotherhood visiting Tehran, or Iran sending mediators to meet our leadership,” said Droubi. “We didn’t hear details about the offer and we didn’t open an opportunity for them to discuss it.

“We refuse to either go there or receive them until they clearly stop their support of the regime and take a neutral position between the Syrian people and Bashar al-Assad. As long as they remain a party in this struggle, we will refuse to meet them.”

Another high ranking Brotherhood official was quoted by the pan-Arab daily al-Hayat on Wednesday as saying Iranian mediators had proposed a deal offering control of the government in Damascus if President Bashar al-Assad could remain president.

It said that Iranian mediators offered a plan in which the Brotherhood would head up four government ministries but gradually obtain full control of the government.

Over 5,000 civilians and army defectors have been killed by Assad’s forces during the uprising, by a United Nations count.

Damascus says it is fighting Islamist militants steered from abroad and blames them for the death of more than 2,000 members of its security forces.

Al-Hayat also cited Farouq as saying that his movement’s relations were almost completely severed with the Islamist militant group Hamas, a Palestinian offshoot of the Brotherhood still officially headquartered in Damascus with Assad’s support.

Hamas has drawn down its presence in Syria but has refused to take a stand for or against the anti-Assad protests.

Reuters: Iran's Revolutionary Guards will grow in strength despite...