Iran steps back from warning on U.S. ships

New York Times: Iran’s Revolutionary Guards said Saturday that it considered the likely return of American warships to the Persian Gulf part of routine activity, backing away from previous warnings to Washington not to re-enter the area. 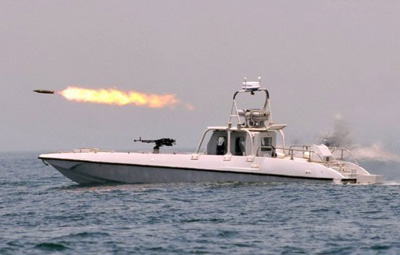 TEHRAN (Reuters) — Iran’s Revolutionary Guards said Saturday that it considered the likely return of American warships to the Persian Gulf part of routine activity, backing away from previous warnings to Washington not to re-enter the area.

The statement may be seen as an effort to reduce tensions after Washington said it would respond if Iran made good on a threat to block the Strait of Hormuz, the vital shipping lane for oil exports from the gulf.

“U.S. warships and military forces have been in the Persian Gulf and the Middle East region for many years, and their decision in relation to the dispatch of a new warship is not a new issue, and it should be interpreted as part of their permanent presence,” a Revolutionary Guards deputy commander, Hossein Salami, told the official IRNA news agency.

The comments may be a response to the European Union and Washington’s rejection of Iran’s declaration that it was close to resuming negotiations with world powers, and with the Pentagon’s saying that it did not expect any challenge to its warships.

Crude oil prices have spiked several times this year on fears that diplomatic tensions could escalate to military clashes and uncertainty about the effect of sanctions on the oil market.

Along with the European Union, which is set to agree on an embargo on Iranian oil, the United States hopes the sanctions will force Iran to suspend the nuclear activities that it believes are aimed at making an atomic bomb, a charge Iran denies.

There has been no American aircraft carrier in the Persian Gulf since the John C. Stennis left at the end of December at a time when the Islamic Revolutionary Guards Corps was conducting naval maneuvers.

On Jan. 3, after President Obama signed new sanctions aimed at stopping Iran’s oil exports, the Iranian government ordered the Stennis not to return — an order interpreted by some analysts in Iran and Washington as a blanket threat to any United States carrier.

“I recommend and emphasize to the American carrier not to return to the Persian Gulf,” Iran’s army chief, Maj. Gen. Ataollah Salehi, said at the time. “We are not in the habit of warning more than once.”

Washington says it will return, and Defense Secretary Leon E. Panetta said any move to block the Strait of Hormuz, through which about a third of the world’s sea-borne traded oil passes, would be seen as a “red line,” requiring a response.