AFP: “A Separation”, the Iranian film that Sunday picked up the Oscar for best foreign language film, hides a deep social expose of the Islamic republic of today behind the veneer of a taut family drama.
By Marc Burleigh 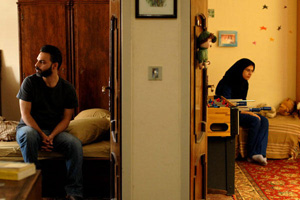 TEHRAN (AFP) — “A Separation”, the Iranian film that Sunday picked up the Oscar for best foreign language film, hides a deep social expose of the Islamic republic of today behind the veneer of a taut family drama.

The multi-layered formula is not only rewarding for astute audiences — it was a canny way for writer-director Asghar Farhadi to get around censors and other officials who are increasingly restricting Iran’s cinema industry.

In accepting his award in Hollywood, Farhadi said Iranians around the world would celebrate the win, especially as Tehran’s nuclear programme has sparked tensions with the West.

“At the time when talk of war, intimidation and aggression is exchanged between politicians, the name of their country, Iran, is spoken here through her glorious culture, her rich and ancient culture that has been hidden under the heavy dust of politics,” he told the Oscars audience.

“I proudly offer this award to the people of my country, a people who respect all cultures and civilisations and despise hostility and resentment. Thank you so much.”

Authorities in Tehran initially put obstacles in the way of the movie, halting filming in late 2010 because Farhadi had spoken out publicly in support of fellow filmmakers deemed to be “anti-regime”.

Production was allowed to resume only when he apologised.

But Iran’s officials only really stepped up to back “A Separation” — tepidly at first, then completely — when it became an unexpected phenomenon on the festival circuit, picking up awards everywhere it was shown.

For Tehran, its success was a triumph of Iranian culture at a time that the West is trying to isolate the Islamic republic diplomatically, politically and economically over what it says is a drive for nuclear weapons.

Farhadi and his crew, though, have been very careful in interviews never to be drawn into making any political commentary about the movie.

Lead actor Peyman Maadi, 41, told AFP earlier this month that he felt the film had a “universal” appeal.

Its deceptively sparse story provides surprising insights into Iranian life, speaking not only of the estrangement of the couple at the centre of the movie but also of Iranian classes.

“They (the story strands) are so intertwined that you cannot separate them, and I cannot focus on any one of them. The title ‘A Separation’ is well-chosen,” Maadi said.

The movie explores the themes of love, lies, honour and unintended consequences with psychological nuance.

The couple at the centre of the film, Nader (Maadi) and his wife Simin (Leila Hatami), begin the tale with a reluctant bid for divorce.

Strong performances by the lead actors lend punch to the movie, which sees Nader and Simin embroiled in a legal dispute with another couple following a desperate, tragic event at home.

As the story develops, it becomes clear that “A Separation” is also about a wider narrative: that of a fracture in the country in which they live, between Iran’s middle class, whose values and missteps are easily recognised by audiences everywhere, and Iran’s poorer underclass, with its feeling of powerlessness and adherence to religion.

Revelations along the way force the viewer to rethink what had passed before and the moral choices being made.

The Oscar win by this engrossing, subtle production is all the more poignant given the environment in which Iranian filmmakers now find themselves.

Several directors have been arrested in recent months, and one of the most famous, Jafar Panahi, has been ordered to jail and slapped with a 20-year ban on making movies for a documentary he tried to make on the unrest following the disputed 2009 re-election of President Mahmoud Ahmadinejad.

The ministry of culture has also dissolved the country’s main film industry guild, the House of Cinema, and replaced it with another body over which it holds greater sway.

History News Network:  Tehran has been outmaneuvering the West, particularly...