UPI: Friday’s parliamentary elections in Iran are likely to intensify a power struggle between rival hard-line factions led by Supreme Leader Ayatollah Ali Khamenei and President Mahmoud Ahmadinejad and fuel a confrontation with the West over the country’s nuclear program. United Press International 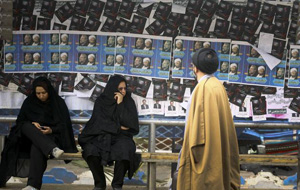 TEHRAN, March 1 (UPI) — Friday’s parliamentary elections in Iran are likely to intensify a power struggle between rival hard-line factions led by Supreme Leader Ayatollah Ali Khamenei and President Mahmoud Ahmadinejad and fuel a confrontation with the West over the country’s nuclear program.

The voting is also being conducted against a backdrop of a threatened pre-emptive strike by Israel against Iran’s nuclear facilities and ever-tightening international sanctions aimed at pressuring Tehran into abandoning its nuclear project.

That’s something both factions battling for political supremacy refuse to do, so the result of the nationwide voting is unlikely to produce significant change in the regime’s confrontation with the West.

The vote is widely seen as an important test of the leadership’s legitimacy and will provide a pointer toward the run-up to the potentially more explosive presidential elections in 2013 that could well decide Iran’s future direction.

But with U.S. presidential elections in November, it’s unlikely Friday’s poll will alter the current standoff.

“My bet at this point is … that until the American elections are over, conditions for any kind of serious negotiations (on the nuclear issue) are low,” observed Iran expert Farideh Farhi of the University of Hawaii.

Friday’s election for the 290-seat Majlis, or parliament, is the first national ballot since the violence-marred presidential vote in 2009 in which Ahmadinejad, a populist firebrand once favored by Khamenei, was re-elected for a second four-year term amid allegations of massive fraud.

Ahmadinejad, who cannot run for a consecutive third term, is locked in a high-profile power struggle with the powerful religious conservatives headed by Khamenei, a former president who succeeded the Islamic Republic’s founder, Ayatollah Ruhollah Khomeini, after he died in 1989.

The rival conservative factions are collectively known as “principlists.”

The clash within the leadership is the most intense internal political struggle since the bloody aftermath of the 1979 Islamic Revolution that toppled Shah Mohammed Reza Pahlavi and put the puritanical Khomeini in power.

Khamenei’s faction is widely seen as holding most of the cards because he has the backing of the powerful Islamic Revolutionary Guard Corps and the cleric establishment.

He also has the support of the Bazaaris, the highly influential merchant class whose switch of allegiance from the shah to Khomeini in late 1978 ensured the Islamists’ victory the following year when the monarch fled into exile.

Ahmadinejad is striving to secure greater powers for the presidency, which since the founding of the Islamic Republic has always been secondary to the religious leadership of Khomeini and later Khamenei.

Political analysts say the 12-member Guardian Council, evenly divided between clerics and jurists who vet all electoral candidates, has excluded many of Ahmadinejad’s associates, forcing him to field political unknowns.

Iran’s reformists, brutally crushed in the uproar over the legality of the 2009 poll, are no longer a viable political force. Major reformist parties have been banned, key leaders imprisoned and their publications closed.

Ahmadinejad, with some of his closest advisers behind bars or politically disgraced through the machinations of the security services controlled by Khamenei, is likely to lose heavily Friday.

Hanging like an ominous black cloud over these political events are the swelling regional tensions, heightened by military saber rattling on both sides as Iran’s all-important oil exports are throttled by U.S. and European sanctions.

“While ordinary Iranians are anxious about the increasingly harsh sanctions … the political class appears more consumed by the parliamentary election,” Oxford Analytica observed.

“Concerns over low turnout and electoral maneuvering among the principlist camps have preoccupied the leadership.

“This emphasis on turnout reflects the leadership’s reliance on elections as a source of legitimacy … It is concerned that pro-reformist voters may boycott the poll.”

This concern was underlined by Revolutionary Guard commander Gen. Mohammad Ali Jafari, who warned that “enemies” intended to “revive sedition” after the elections.

He called on Iranians to counter this through “maximum participation” in Friday’s polling.

Amid the political turmoil, the leadership’s preoccupation with the power struggle has led to uncertainty over who calls the shots in Tehran, a dangerous proposition given the deepening regional crisis.

“It’s a symptom of a headless government,” said Vahe Petrossian, an Iran energy specialist. “They’re just making things up as they go along.”

UN warns of dangers posed to Iranian dissidents in Iraq

by Pooya Stone Eleven people have died because of...