Timing of nuclear claim puts Tehran on the spot

New York Times: To the untrained eye it could be an industrial boiler or a storage tank. But an unidentified official says the picture above shows an explosives chamber used by Iran to conduct nuclear weapons-related tests.

View From Europe – By HARVEY MORRIS 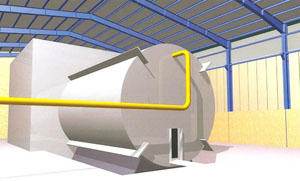 LONDON — To the untrained eye it could be an industrial boiler or a storage tank. But an unidentified official says the picture above shows an explosives chamber used by Iran to conduct nuclear weapons-related tests.

It was published over the weekend by the Associated Press on the eve of talks in Vienna on Monday between Iranian negotiators and experts from the International Atomic Energy Agency, the world nuclear watchdog.

In an accompanying article, AP quoted the official, from a country that is severely critical of Iran’s assertions that its nuclear activities are peaceful, as saying the picture proved the structure existed.

The I.A.E.A. was on Monday expected to press Iran once more for access to its Parchin military site where, according to AP’s source, the chamber is located.

The latest claim involving Parchin comes at a sensitive time. Iran and the so-called P5+1 group of major powers – the United States, Russia, China, Britain, France and Germany – held talks in Istanbul last month after a 15-month gap. They are scheduled to meet again in Baghdad on May 23.

So what does the picture show?

“It could be a hydrodynamic test chamber — or it could be anything,” John Large of Large and Associates, a British-based nuclear consultant, told Rendezvous.

He said a high school science graduate would be capable of making the drawing, which did not mean it was not genuine.

“You would expect it in a development program like this,” he said. “All the bits of the jigsaw are being drawn together.”

Mr. Large said such a chamber would require between 30 and 50 kilograms of conventional explosives to test the compression of nuclear material at the core of a nuclear bomb.

“It would indicate a fairly crude level of development,” he said. “The Americans and others now use computer-modeling for this, which means you can do everything in miniature.”

He said full-scale testing using a device of the kind shown in the picture would be detectable as a series of short, sharp bangs. “They would probably locate it at about 25 meters underground,” said Mr. Large, “or in an area where there’s lots of quarrying, in order to disguise the explosions.”

The latest claims about Parchin, located about 20 miles southeast of Tehran, come just a few days after new satellite imagery prompted suggestions Iran had tried to clean up a suspected explosives testing chamber there, as Rick Gladstone reported.

In Israel, Defense Minister Ehud Barak said on Monday the information was nothing new. “This diagram is part of the information known to all leading intelligence agencies in the free world for some time,” he told Army Radio.

Antiwar groups immediately cried foul, claiming the picture was another attempt to justify a war with Iran.

“We have ten days to go before the Baghdad talks…plenty of time for the War Party to torpedo the prospects for peace with yet another Iraq-like ‘weapons of mass destruction’ propaganda campaign,” wrote Justin Raimondo at antiwar.com.

There was no immediate response from Iran, where Saeed Jalili, Iran’s chief nuclear negotiator, warned Western officials ahead of the Vienna talks to avoid making “unconstructive” comments and false allegations against the Islamic Republic.

MPs call for ‘probe’ into the massacre at Camp Ashraf

NewsBlaze: The massacres of Iranian dissidents by the al-Maliki...