Reuters: Leaders of the Group of Eight major economies raised the pressure on Iran on Saturday, signaling their readiness to tap into emergency oil stockpiles quickly this summer if tougher new sanctions on Tehran threaten to strain supplies. By Jeff Mason 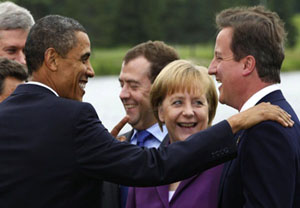 CAMP DAVID, Maryland – (Reuters) – Leaders of the Group of Eight major economies raised the pressure on Iran on Saturday, signaling their readiness to tap into emergency oil stockpiles quickly this summer if tougher new sanctions on Tehran threaten to strain supplies.

“We remain united in our grave concern over Iran’s nuclear program,” the G8 leaders said in a statement summing up the results of their meeting in Camp David in rural Maryland.

In unusually blunt language, the G8 put the International Energy Agency — the West’s energy adviser responsible for coordinating reserves — on standby for action.

It was the clearest sign yet that U.S. President Barack Obama is winning support for tapping government-held oil stocks for the second time in two years.

“Looking ahead to the likelihood of further disruptions in oil sales and the expected increased demand over the coming months, we are monitoring the situation closely and stand ready to call upon the International Energy Agency to take appropriate action to ensure that the market is fully and timely supplied,” the G8 said in separate statement earlier on Saturday.

The meeting came just days before the next round of Iran talks, to be held in Baghdad. Western countries suspect Iran’s nuclear program is aimed at making a nuclear bomb, a charge Tehran denies. The U.N. nuclear chief is also due to fly to Tehran on Sunday in an apparent bid to secure a deal enabling his inspectors to probe suspicions of atomic bomb research.

“All of us are firmly committed to continuing with the approach of sanctions and pressure in combination with diplomatic discussions,” Obama told reporters.

“And our hope is that we can resolve this issue in a peaceful fashion that respects Iran’s sovereignty and its rights in the international community, but also recognizes its responsibilities,” he said.

Although it made no explicit mention of oil reserves, the message was unmistakable. “That’s what the IEA does … it coordinates the release of strategic reserves,” Michael Froman, a senior White House aide, told reporters.

Speculation had been growing that Obama would use an energy session at the G8 to seek support to tap emergency oil reserves before a European Union embargo of Iranian crude takes effect in July and tough new U.S. sanctions come into force in late June. Exports have already fallen by more than a fifth this year.

The meeting also showed that this month’s slump in oil prices has not deterred Obama from moving toward tapping the Strategic Petroleum Reserve (SPR) again – an unprecedented second release for a U.S. president. That could expose him to criticism from Republicans that he is using a national security tool to win votes this November.

Froman said although oil prices have been declining in recent weeks, they remain high. H e said the G8 did not discuss any specific trigger that would prompt action.

“It’s an important statement to the market, to consumers, to producers, to the Iranians that the G8… has a common position, that they are ready to act, and to act through the IEA, to ensure that the market is fully… supplied as these sanctions go fully into effect,” he said.

The statement also made an indirect reference to concerns that big producers — principally Saudi Arabia — may be running short of extra capacity to boost output further, more reason to ready emergency stocks.

Saudi Oil Minister Ali al-Naimi says the kingdom is pumping around 10 million barrels per day (bpd), leaving it another 2.5 million bpd in reserve. But some analysts fear it could not sustain output at that peak level.

“There have been increasing disruptions in the supply of oil to the global market over the past several months, which pose a substantial risk to global economic growth,” the statement said.

“In response, major producers have increased their output while drawing prudently on excess capacity.”

Saudi officials have highlighted the 80 million barrels they are storing at home and abroad to assure consumer nations that they can keep the world supplied with crude without the need to tap into emergency stocks.

Tapping the reserves is not a foregone conclusion. It is unclear yet whether Obama and allies would opt to wait and see if Iran’s exports fall and prices spike, or move preemptively to head off a speculative panic that could drive U.S. gasoline quickly above $4 a gallon.

U.S. crude oil has tumbled 12 percent this month, dropping to the lowest point since before a November U.N. report on Iran’s atomic program which kindled global fears.

Iran and the world powers involved in nuclear diplomacy – the United States, Russia, China, Britain, France and Germany – revived negotiations in Istanbul last month after a 15-month hiatus during which the West sharpened sanctions to an unprecedented degree, targeting Iran’s oil trade and banks.

The resumption of diplomacy offers a chance to defuse that tension as well as worries about a new Middle East war. Their next meeting will take place in the Iraqi capital on May 23.

“We call on Iran to seize the opportunity that began in Istanbul, and sustain this opening in Baghdad by engaging in detailed discussions about near-term, concrete steps that can, through a step-by-step approach based on reciprocity, lead towards a comprehensive negotiated solution which restores international confidence that Iran’s nuclear program is exclusively peaceful,” the G8 statement said.

US seeks ‘punitive’ measures against Iran

AFP: The United States on Wednesday called for "punitive"...