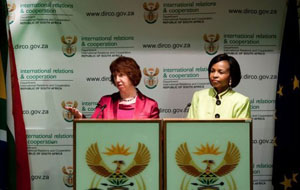 The talks were part of preparations for an annual EU-South Africa summit set for September 18 in Brussels, which President Jacob Zuma is scheduled to attend.

Regarding Iranian oil sanctions, “we have agreed to send a South African … delegation to Brussels to discuss the impact of the application of EU sanctions on Iran, on South Africa, and the rest of the southern African region,” Nkoana-Mashabane said.

The European Union and the United States have clamped sanctions on Tehran to force Iran to abandon its contested nuclear programme, and nations which import crude oil from Iran could run foul of the measures.

“It is just not possible to wake up one day and say we will no longer import crude oil from Iran,” the South African minister stated.

South Africa has nonetheless indicated it is looking at Nigeria and Angola as alternative sources of crude oil.

On Zimbabwe, where President Robert Mugabe and close aides are also the target of EU sanctions, Ashton did not make any promises regarding a proposal to lift the measures.

Zimbabwe, with the backing of other countries in southern Africa, want the sanctions lifted unconditionally.

But Ashton replied: “The sanctions are the sanctions, and they exist.”

EU ministers last month said they would lift sanctions against most of the 112 Zimbabweans still listed on a decade-old EU asset freeze and travel ban, once the country held a “credible” vote on a new constitution.

“Our big, big push is to finish the work on the constitution, to get the referendum done, and to move towards elections,” said Ashton.

Zimbabwe’s draft constitution was approved by both sides last month but Mugabe put a damper on the process last weekend, saying more work was needed on the long-delayed document.

The constitution would rein in presidential powers, bolster those of parliament and set a 10-year presidential term limit.