Bloomberg: A month into shooting the film adaption of Salman Rushdie’s “Midnight’s Children” in Sri Lanka last year, production came to a sudden halt. Iran, a sworn enemy of Rushdie, demanded that the government stop the shoot. Bloomberg 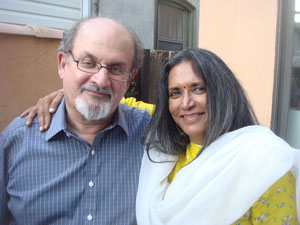 A month into shooting the film adaption of Salman Rushdie’s “Midnight’s Children” in Sri Lanka last year, production came to a sudden halt.

Iran, a sworn enemy of Rushdie, demanded that the government stop the shoot.

Director Deepa Mehta appealed to Sri Lankan President Mahinda Rajapaksa, with whom she’d already had tea, to win support for the production. For three anxious days, she waited in Colombo for him to return from campaigning in the country’s hilly interior.

“It was a tense time, especially when you are paying for a crew sitting around doing nothing,” Mehta recalled in an interview in Toronto, three days before the film’s debut at the Toronto International Film Festival. When Rajapaksa returned, he tore up the letter of protest and production was back on.

“He said ‘this is rubbish,’” the director said. “He wasn’t about to get bullied.”

Nor is Mehta, who has stood up to frequent protests and controversies over her films in the past.

Shooting of “Water,” her 2005 Oscar-nominated film, was moved to Sri Lanka after the Indian set was disrupted by Hindu fundamentalists upset with its treatment of the topic of child marriage and widows.
‘Elements’ Trilogy

Mehta, 62, was born in India and graduated from the University of Delhi with a degree in philosophy. She currently splits her time between homes in Toronto and Delhi.

In June, 2008 she and Rushdie had dinner when the Anglo- Indian author was in Toronto for a book tour. She asked him about the film rights to “Midnight’s Children” and he agreed to sell them to her for a dollar. That was the easy part.

Next came the challenge of turning a 500-page epic, which chronicles India’s turbulent history of partition as witnessed through the eyes of a boy and his multi-generational family, into a manageable screenplay.
No, Thanks

At first, he didn’t want to write the screenplay, she said. She was undeterred. “I absolutely insisted, ‘you have to do it.’”

They quickly found that they were in agreement on key elements of the book that should be in the film.

Mehta said it was daunting to write scenes for an adaptation of a book that won the “Booker of Bookers” in 2008, celebrating the literary prize’s 40th anniversary. Rushdie gave her free rein.

“He made me feel extremely comfortable questioning anything or everything.”

Shooting outside India was a sensible precaution, given both her track record and Rushdie’s. It was his 1988 novel “The Satanic Verses,” inspired in part by the life of Muhammad, that prompted the Iranian government to issue the fatwa, or bounty on his head.

“India could not bully Sri Lanka” over the production, she said.

An added boon was that the skyline and streets of Colombo resemble Bombay of the 1940s and ’50s much more than the booming high-rises of Mumbai today.

Mehta dropped the idea of casting stars in favor of developing the ensemble essential to the story-telling. The film has 127 speaking parts, as well as an array of elephants, cobras, monkeys and geese that had to be corralled.

The final cut was completed three weeks ago and first shown at the Telluride Film Festival in Colorado last week.

“He’s got a great sense of humor,” Mehta said of Rushdie. After a setback during shooting, “I’d say ‘oh my god, what’s going to happen, this is going to be terrible.’ And he’d say, ‘you know I sometimes say that about my books.’”

“Midnight’s Children” will be shown today. For more on the film and the Toronto International Film Festival, go to http://www.midnightschildren.com or http://tiff.net/thefestival.

Muse highlights include Mark Beech on pop music and Elin McCoy on wine.

At the beginning of every new month, Iran Human...