New York Times: The Iranian opposition group that attracted that A-list of Washington backers, many of them generously compensated for speeches, learned Friday that it had achieved its goal. 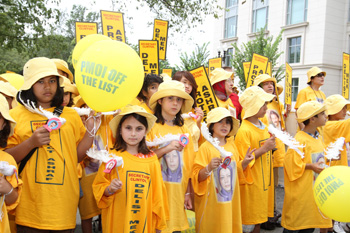 WASHINGTON — Rarely in the annals of lobbying in the capital has so obscure a cause attracted so stellar a group of supporters: former directors of the C.I.A. and the F.B.I., retired generals and famous politicians of both parties.

The Iranian opposition group that attracted that A-list of Washington backers, many of them generously compensated for speeches, learned Friday that it had achieved its goal: Secretary of State Hillary Rodham Clinton has decided to remove the group, the Mujahedeen Khalq, or People’s Mujahedeen, from the State Department’s list of designated terrorist organizations.

The decision removes a shadow from the Mujahedeen Khalq, known as the M.E.K., which lost a brutal power struggle with supporters of Ayatollah Ruhollah Khomeini in the first years after the Islamic Revolution in 1979 and then relocated to Iraq. Scorned by many Iranians as a cult and for its long alliance with Saddam Hussein, the group nonetheless has been promoted by some conservative American politicians as offering a democratic alternative for Iran’s future. While the decision is likely to anger Iran, experts said that United States-Iran relations are already at such a low point that it is unlikely to make them much worse.

The decision by Mrs. Clinton was based in part on the recent cooperation of the group, in completing a move of more than 3,000 of its members from its longtime location in Iraq, Camp Ashraf, said two officials, who spoke on the condition of anonymity in advance of an official announcement. A final convoy of 680 people from Ashraf arrived at the former site of Camp Liberty, near the Baghdad airport, on Sunday.

The United States military disarmed the group after the invasion of Iraq in 2003, assuming responsibility for security at Camp Ashraf. But the Shiite-dominated government in Baghdad has close ties to Iran, and M.E.K. supporters believed its members in Iraq were at grave risk. Since control of Camp Ashraf was turned over to Iraq in 2009, two clashes with Iraqi security forces left about 49 M.E.K. members dead.

Nonetheless, officials of the group, including its leader in Paris, Maryam Rajavi, had been slow to cooperate with a United Nations plan to empty Camp Ashraf, as demanded by Iraq, and await resettlement to other countries. In recent months, M.E.K. officials had repeatedly delayed planned convoys, complaining about what they described as poor living conditions at the camp.

The group’s lawyers had challenged the terrorist listing in court, and Mrs. Clinton faced an Oct. 1 deadline to make a decision.

It even enlisted journalists as speakers, including Carl Bernstein, of Watergate fame, and Clarence Page, a columnist for The Chicago Tribune.

Mr. Rendell said then that his speaking agency had received a subpoena for records of his payments from the Treasury Department, which appeared to be examining whether the payments were legal. He said he believed they were legal because they came from Iranian-American supporters and not from the M.E.K. itself. A Treasury spokeswoman declined to say whether any investigation is continuing.

But Mr. Rendell and others said that while the offer of lucrative speaking fees may have first drawn them to the group’s cause, they became convinced that it was unfair and dangerous to leave the group on the terrorist list.

“Yes, I was paid to speak at certain events,” said Philip J. Crowley, who served as an assistant secretary of state from 2009 to 2011. “But what drove me was the humanitarian issue of getting them safely out of Iraq and the strategic importance of Iran for the United States.”

The terrorist label imposed in 1997, the supporters said, was outdated and might be interpreted as a green light by Iraqis or Iranian agents to attack the group. The group did commit terrorist attacks in the 1970s and 1980s, first against the government of the shah of Iran and later against the clerics who overthrew him, and several Americans were among those killed.

It allied itself with Mr. Hussein, the Iraqi dictator, who permitted it to operate from Camp Ashraf. But while some news reports have suggested its involvement in the recent assassination of Iranian scientists, American officials have not confirmed the claim, and by most accounts the group has not committed acts of violence for many years.

Shahin Gobadi, an M.E.K. spokesman in Paris, said the group had received no official word of the delisting. He said the terrorist designation was “a gift to the mullahs’ regime and greatly assisted prolonging the rule of the religious dictatorship ruling Iran.”

Some members of Congress have become outspoken advocates for the M.E.K., which originally embraced a hybrid of Marxism and Islamism, but now speaks of democracy. They accept its claim to be “the main organized opposition” to Iran’s clerical rulers.

Representative Dana Rohrabacher, Republican of California, welcomed Mrs. Clinton’s decision, which was formally delivered Friday. “The lives of hundreds of the M.E.K. misplaced persons could well be saved as result,” he said. “It took a while, but in the end Secretary Clinton made the right decision, and for that we are grateful.”

By contrast, the National Iranian American Council, which has long feuded with the group, denounced the delisting decision, saying that it “opens the door to Congressional funding of the M.E.K. to conduct terrorist attacks in Iran” and “makes war with Iran far more likely.” The statement compared the M.E.K. to Ahmad Chalabi, the Iraqi exile who helped persuade the Bush administration to invade Iraq.

Karim Sadjadpour, an expert on Iran at the Carnegie Endowment for International Peace, said he thought the M.E.K. was less important than either its backers or critics claimed.

“They’re widely viewed as a backward and intolerant cult by their opposition peers in Iran,” he said. After the terrorist label is dropped, Mr. Sadjadpour said, “I don’t think the world really looks that much different. U.S.-Iran relations will remain hostile, and the M.E.K. will remain a fringe cult with very limited appeal among Iranians.”

About 100 of the group’s members are expected to stay at Camp Ashraf for now, with permission of the Iraqi authorities to oversee the group’s property there, American official said.

Reuters: The United States is investigating a combination of...