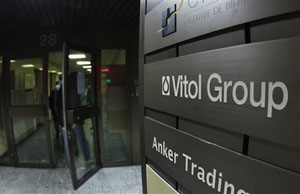 Vitol last month bought 2 million barrels of fuel oil, used for power generation, from Iran and offered it to Chinese traders, Reuters established in interviews with 10 oil trading, industry and shipping sources in Southeast Asia, China and the Middle East.

The Swiss-based firm issued a statement saying Vitol Group is in compliance with all international laws on trade with Iran.

“A Bahraini subsidiary company purchased a spot cargo of fuel oil from a non Iranian counterparty in July 2012. The fuel oil delivered under contract was of Iranian origin. Vitol Group companies no longer purchase any product of Iranian origin,” Vitol said, without elaborating.

Vitol is not obliged to comply with a ban imposed in July by the European Union on trading oil with Iran because Switzerland decided not to match EU and U.S. sanctions against Tehran.

The company earlier in the year stopped trading Iranian crude oil from its main European offices before the July 1 EU embargo deadline. But the trading sources said it has continued to deal in Iranian fuel oil from the Middle East.

The tale of the cargo of Iranian fuel oil involves tanker tracking systems being switched off, two ship-to-ship transfers, and blending of the oil with fuel from another source to alter the cargo’s physical specification.

Privately-held Vitol SA is led by its long-time CEO Ian Taylor, a Briton. Taylor was among leading donors to Britain’s ruling Conservative Party named in March by the Prime Minister’s office as having dined with David Cameron at his private apartment in Downing Street amid the fall-out from a “cash for access” party funding scandal. Britain is a vociferous critic of Tehran’s nuclear program and a leading advocate of the EU sanctions.

Vitol has said previously it is in compliance with sanctions against Iran, but has declined to say whether or not it would follow the strict EU regulations rather than Switzerland’s.

A spokesman for EU foreign policy chief Catherine Ashton said Brussels was following developments with interest, adding: “We regularly reach out to third (party) states to encourage alignment with our sanctions regime.”

A spokeswoman for Switzerland’s federal department responsible for sanctions, SECO, said Vitol’s Swiss branch had confirmed it was not involved in the purchase of Iranian fuel oil in July. She said EU and Swiss law did not apply to Vitol’s trading branch in Bahrain. She declined to say if Vitol was on a list of companies that had sought permission to trade Iranian oil, citing commercial secrecy.

Rival Swiss-based traders Glencore and Trafigura said in July they had halted all Iranian oil trade, even though the Swiss government opted against following measures imposed by Washington and Brussels.

On top of the EU ban, Iran’s four biggest oil buyers – China, India, Japan and South Korea – have reduced their imports by at least a fifth to secure exemptions from the threat of U.S. financial sanctions on their companies.

Vitol last year earned record revenue of $297 billion, a near-five-fold increase since 2004. It does not reveal profits.

Fuel oil is a small part of its trading portfolio, accounting for $24 billion of revenue last year compared to $105 billion from crude and $100 billion from other refined products.

Profit margins on oil trade are typically very low, but traders said Iran’s difficulties in finding buyers because of sanctions are likely to have made for a fat profit margin for trading its fuel oil.

Vitol acquired the Iranian fuel oil early this month in a ship-to-ship transfer off Malaysia from a National Iranian Tanker Company (NITC) vessel, the Leadership, onto a Vitol-chartered tanker, the Ticen Ocean.

The Ticen Ocean was sub-contracted by Vitol for floating storage off the Malaysian port of Tanjung Pelepas from Titan Petrochemicals, a Hong Kong company which itself hired it from shipowner Frontline of Norway.

Frontline said Titan had told it the ship was not used to store Iranian oil. “Our only counterpart in this matter is Titan and they have said it is not correct that there has been Iranian oil on the boat,” said Frontline CEO Jens Martin Jensen.

Titan did not return calls or emails seeking comment.

The Leadership left Iran’s main oil export terminal at Kharg Island during the week of August 23, passing through the Strait of Malacca before disappearing from freight tracking systems off the Malaysian coast on September 4. Since sanctions were imposed, Iranian vessels have frequently switched off the onboard ‘black-box’ transponders used in the shipping industry to monitor vessel movements.

Vitol also transferred some of its fuel oil from the Ticen Ocean between September 11-12 to another vessel, the Kamari I, according to Reuters data. That cargo was delivered to Vitol’s storage terminal on the Malaysian island of Tanjung Bin, inside Tanjung Pelepas port, one trading source said.

Traders said the company then blended the oil in storage with fuel oil sourced from Europe, calling it a “special blend” and offered it to Chinese traders. Reuters was given a copy of the specifications of the cargo on offer.

Vitol first asked a $30 premium to Singapore’s benchmark 180-centistoke fuel oil price, said a Chinese industry executive who manages some of China’s many small, independent refineries, known as teapots. That would have valued the 2-million-barrel cargo at about $250 million.

“Because the offer was too high, our people didn’t really carry on the talks,” the Chinese executive said. “Vitol also appeared not in a hurry to sell, so was not being aggressive.”

Two Asian refinery buyers who were then offered the oil said the asking price was cut to a $12-$14 premium to Singapore benchmark prices, or around $175 million in total.

“Vitol is offering the cargo as a special blend to teapot refiners in Shandong,” said a China-based trader. “No one’s agreed to buy the Vitol cargo. I declined because I wasn’t sure of the quality and specifications.”

At the time of publication it is not known whether Vitol had agreed a deal to sell the oil.

Vitol’s use of the Ticen Ocean to store Iranian oil could put the tanker’s insurance at risk. The vessel is insured by the North of England P&I Association.

Mike Salthouse, director of North Insurance Management, which acts as manager for the North of England P&I Association, said it would not provide cover for tankers storing or transporting Iranian oil.

“We would not expect to continue to insure any fleet actively engaged in this trade,” he said, but declined comment specifically on the Ticen Ocean.