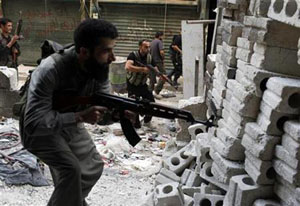 The conflict has already drawn in a stream of Sunni Islamist fighters from across the region attracted to the rebel cause, while on the other side Syrian rebels accuse Lebanon’s Shi’ite Hezbollah of supporting Assad’s troops on the ground.

For Iraqi Shi’ites who follow Iran’s Ayatollah Ali Khamenei, the uprising in Syria threatens Shi’ite influence and Iraqis fighting there say they see a duty to help Assad because of their loyalty to the Islamic Republic’s highest authority.

Among them are defectors and former fighters from anti-U.S. Iraqi cleric Moqtada al-Sadr’s Mehdi Army, the Iran-backed Badr group and Asaib al-Haq and Kata’ib Hezbollah, militias who once waged a bloody war on American troops, Shi’ite militants and Iraqi politicians say.

Shi’ite politicians say militants fighting in Syria have no official sanction from their militia leadership or from Iraq’s Shi’ite-led government which is caught in a delicate balancing act between its ally Tehran, and Western and Arab powers calling for Assad to go.

Some of the Iraqi militants are former Mehdi Army fighters who took refuge in Syria after 2007 when their group was crushed by Iraqi forces. Others, loyal to Khamenei as a religious authority, crossed over recently, fighters and Iraqi politicians say.

“We formed the Abu al-Fadhal al-Abbas brigade which includes 500 Iraqi, Syrian and some other nationalities,” an Iraqi defector from the Mehdi Army who goes by the name of Abu Hajar told Reuters by satellite telephone from Syria.

“When the fighting erupted in our areas, we carried out some joint military operations side by side with the Syrian army to clean up areas seized by rebels,” said Abu Hajar, who like others was a refugee in Syria before the conflict.

The brigade is named after Abu al-Fadhl al-Abbas, a brother of Imam Hussain Bin Ali, a grandson of the Prophet Mohammed. Al-Abbas was killed with his brother more than 1,300 years ago, and since then has become a symbol of sacrifice for Shi’ite Islam.

Another Mehdi Army defector, Abu Mujahid, who recently returned from Syria to visit his family in the Iraqi city of Najaf said his group’s mission in Syria was restricted to securing the famed Sayyida Zeinab Shi’ite shrine and its nearby Shi’ite neighborhoods.

But sometimes, he said, they carry out pre-emptive raids on Free Syrian Army rebel fighters, whenever they get information rebels will attack the shrine, offices of Shi’ite religious leaders, known as Marjaiya, and Shi’ite neighborhoods.

“Our mission is securing the shrine, the Shi’ite areas and the Marjaiya offices,” Abu Mujahid said. “We have no clear battlefield, but, from time to time, we carry out raids with the army on the sites of the Free Syrian Army.”

Syrian rebels consider the Shi’ite militants a pro-Assad militia. Some have been captured and killed in combat, militants and local families in Iraq said.

In Baghdad’s Ameen Shi’ite neighborhood, a large recently erected billboard shows the photograph of a bearded Mehdi Army militant who the poster proclaims became a “martyr” in February. Neighborhood families say he was killed in fighting in Syria.

A video posted on YouTube last month by Syrian rebels showed a young man named as Ahmed al-Maksosi whose face appeared to be swollen with signs of beating and torture as he confessed that he was a Mehdi Army fighter.

Iraqi Shi’ite militants said Maksosi was one of their comrades fighting with them in one of the Sayyida Zeinab neighborhoods. They said he was kidnapped and tortured by the FSA before he was killed.

Abu Mujahid, Abu Hajar and Iraqi Shi’ite politicians with knowledge of the militias said those who went to Syria were individual volunteers traveling with their own passports through regular routes.

They said there were contacts responsible for receiving and organizing volunteers, arming them and directing them to tasks, but all were facing the problem of funding, much of which they said came from some Iraqi merchants in Syria.

The Badr organization, Asaib al-Haq and Mehdi Army leaders told Reuters they had not sent fighters to Syria because they believe the upheaval was an internal affair. Sending fighters would be an intervention in the Syrian affairs.

“We have not sent any people to Syria…some people think fighting in Syria is legitimate, so maybe individuals went there without coordinating with their leaders,” said a senior Badr organization leader, who spoke on condition of anonymity.

Syria’s upheaval is a political nightmare for Iraq’s Shiite led government which believes a messy fall of Assad would fracture Syria along sectarian lines and yield a hostile, hardline Sunni Muslim regime that could stir up Iraq’s own combustible Sunni-Shi’ite communal mix.

Iraq says it has a policy of non-interference in Syria – but stays close to Tehran’s position by refusing to endorse Western and Arab League demands for the removal of Assad, whose Alawite minority faith is an offshoot of Shi’ite Islam.

The United States, European allies, Turkey and Gulf Arab states have sided with the Syrian opposition while Iran, Russia and China have backed Assad, whose family and minority Alawite sect have dominated Syria for 42 years.

Shi’ite-ruled Iran has tried to counter a perceived drive by Western and U.S.-aligned Sunni Muslim nations to roll back its own power in the Middle East and fears success for the Sunni-led uprising in Syria.

Iraqi militants and politicians say there appear to be no Iranian fighters on the ground in Syria, but there were Lebanese Hezbollah experts and officers training people.

“Iran is working there by using Hezbollah, there are officers and militants from Hezbollah-Lebanon training the citizens and developing their fighting skills and abilities,” Iraqi militant Abu Mujahid said.

Iran has nominated a senior Iraqi Shi’ite leader within Badr – whose political wing ISCI is closely backed by Tehran – to control militant groups and coordinate between the Syrian government and the Iraqi Shi’ite groups, a politician allied with the militia groups said.

“Syria’s army troops cannot hold all the ground,” said Abu Mujahid. “They come for an hour or two, daily, to liberate the seized areas from the rebels and leave the rest up to us and the Shi’ite residents of these areas.”

Wall Street Journal: Turkey on Friday acknowledged that a...

By Jubin Katiraie On August 14, the United Nations...