AFP: Bad blood between Iran’s government and parliament spilled into open on Sunday over the impeachment of a minister, with heads of the two branches accusing each other of corruption and abuse of power. By Mohammad Davari 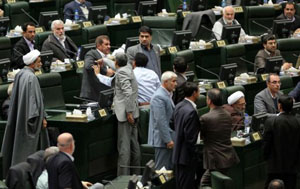 TEHRAN (AFP) — Bad blood between Iran’s government and parliament spilled into open on Sunday over the impeachment of a minister, with heads of the two branches accusing each other of corruption and abuse of power.

A majority of MPs voted in a heated parliament session, broadcast live on state radio, to remove the labour and social welfare minister, Abdolreza Sheikholeslam, for refusing to sack a controversial figure, Saeed Mortazavi.

In the lead-up to the vote, Ahmadinejad questioned the impeachment motion and rebuked the parliament for launching attacks against his clique.

“For three years my colleagues at the government have been under the most severe pressure and accusations,” Ahmadinejad said, while defending his aides ahead of the vote.

To back his claim, Ahmadinejad played a recording in which a voice said to be of their brother, Fazel, allegedly attempts to bribe Mortazavi by asking for a favour in exchange for political support of both parliament and the judiciary.

Ali Larijani in response accused Ahmadinejad of violating the law and preventing justice by shielding his inner circle from judicial probes.

“You have selected those who have judicial cases (against them) as your allies, and prevent their cases from being investigated,” he said.

He then accused Ahmadinejad of using the video as a “threat” to hamper the impeachment process, by relaying a message through one of his deputies that he would play the tape if the impeachment is carried out as planned.

“He threatened me,” Larijani said. “The problem is that the president does not observe the basics of ethics.”

Sunday’s brawl came as Iran is gearing up for its presidential election on June 14 to find a replacement for Ahmadinejad, whose victory in 2009 sparked protests against poll results which the opposition claimed were rigged.

The rift between Ahmadinejad and parliament, dominated by conservatives critical of his administration, surfaced in April 2011 after he challenged a ruling by supreme leader Ayatollah Ali Khamenei, who has final say on all state matters.

The dismissal of Sheikholeslam on Sunday marked parliament’s second successful unseating of Ahmadinejad’s ministers in his second and last term. In February 2011 the then transport minister was dismissed.

Mortazavi, Tehran’s notorious former prosecutor, was suspended in August 2010 along with two other judges over the death in prison of three anti-government protesters in the aftermath of the 2009 presidential election.

A parliamentary probe found Mortazavi responsible for sending protesters to Kahrizak, a detention centre south of Tehran, and demanded he be punished. The case is still ongoing.