The Telegraph: An investment company controlled by Iran’s Supreme Leader Ali Khamenei has been accused of bullying in the takeover of the country’s biggest dealer in German cars. The Telegraph 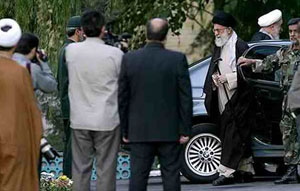 The head of Nouriyani Enterprise, which for 80 years was the exclusive trade partner between Iran and Germany’s car making and printing industries, complained that he had no choice but to sign over his share in its nationwide car dealership to a charity run by Ayatollah Khamenei’s office.

“These gentlemen from the Shah Abdulazim Religious charity came to see me and offered to buy out my shares and work with my enterprise”, Ali Nouriyani, the managing director of Nouriyani Enterprise told the Fararu news website.

“As I was interested in helping charities I accepted their offer and gradually reduced my level of working with them as they had by then virtually taken over most of the responsibilities. I had to offer them more of my own shares to enable them carry out the responsibility (of dealership of BMW cars) more effectively. People keep asking me how on earth I have not had a heart attack after what I have gone through”.

Since the Islamic Revolution, Nouriyani Enterprise’s businesses have been targetted by state-owned bodies controlled by clerics.

The ayatollah likes to cultivate an image of austerity but receives major commissions from the Iranian oil and arms industries and there have been regular claims that he and his son have amassed a fortune running into billions of dollars.

Rey Investment Co, one of the holding companies run by Khamenei’s charity, claims to be the “sole representative of BMW in Iran”. It also has extensive interests in commercial and industrial activities ranging from oil and gas to insurance and transportation.

Mohammad Rey-Shahri, the corporation’s current chairman, is a former minister of intelligence who was appointed to his post by direct order of Ayatollah Khamenei, according to the company’s website.

Another director, Mohammad Shariatmadari, is a close confidante of Ayatollah Khamenei and his advisor on foreign investments.

A spokesman for BMW said there was no formal dealership agreement in place.

“We terminated relations with that organisation in 2009 but we understand it has subsequently been taken over by the Supreme Leader,” a spokesman said.

However the dealership has continued to sell BMW models bought, it is thought, in third countries.

AFP: The Iranian parliament voted on Tuesday to hold...

By Jubin Katiraie On Sunday, contract workers expelled from the...