Wall Street Journal: An official briefed on the operation said the strike appeared to target advanced Iranian-made surface-to-surface Fateh 110 rockets that had arrived by air and that Israel suspected were to be driven to Lebanon and given to Hezbollah. The Wall Street Journal 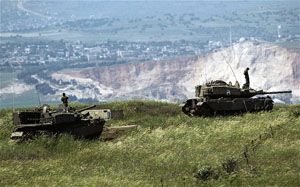 Israel launched airstrikes into Syria Sunday for the second time in three days, said Syria and its allies, in an attack that raised concerns the Syrian civil war could widen into a broader regional conflict.

Syria’s Foreign Ministry said that Israeli jets flying over Lebanon fired at three military installations northwest of Damascus near the Lebanese border. The attack—believed by the U.S. to be aimed at weapons bound for the Lebanese militant group Hezbollah—followed one on Thursday and another in January in the area of one of the facilities targeted Sunday.

Israeli officials wouldn’t confirm or deny being responsible. The Israeli military said Sunday it had deployed two rocket-interceptor batteries near cities in the north, in what an Israeli Defense Forces spokesman called part of “situational security assessments.” U.S. officials believe Israel carried out the airstrikes.

The middle-of-the-night strikes raised fresh worries that the two-year-old civil war pitting the Syrian government against rebels inside the country could widen into a confrontation between Israel and Hezbollah.

An official briefed on the operation said the strike appeared to target advanced Iranian-made surface-to-surface Fateh 110 rockets that had arrived by air and that Israel suspected were to be driven to Lebanon and given to Hezbollah. The U.S. believes Hezbollah already has a small number of Fateh rockets, but the shipment would have greatly expanded its power.

U.S. and European diplomats said Israeli officials had privately told American and European counterparts Israel would take action if necessary to prevent advanced rockets from reaching Hezbollah, but U.S. officials said that they were given little visibility into details. “Israel doesn’t tell us what they do before they do it,” said a U.S. official. He added: “It gives them a lot of deniability.”

The White House on Sunday reiterated the position, stated by Mr. Obama Saturday, that Israel has the right to defend itself. “The Israelis are justifiably concerned about the threat posed by Hezbollah obtaining these advanced weapon systems,” said spokesman Josh Earnest, adding that the president believes that Israel, “as a sovereign government, has the right to take the actions they feel are necessary to protect their people.”
Related Video

Still, the American and European diplomats said the U.S. administration is concerned that actions in the region, including Israel’s operations, could spark a wider war.

Hezbollah has raised the stakes in Syria in recent weeks and attempted to frame the conflict there as a fight between Israel and the West, on the one hand, and an alliance of Iran, Syria and Hezbollah on the other.

Iran is playing an increasingly important role supporting the Syrian regime in coordination with Hezbollah, which Iran helped set up in the 1980s. Hezbollah has dispatched substantial numbers of fighters—some analysts estimate thousands—to Syria to fight alongside government soldiers in trouble spots and help protect Shiite religious sites.

Until recently, Hezbollah moved cautiously to avoid upsetting a delicate political balance within Lebanon. But in April, Hezbollah took control of a string of Shiite Muslim villages inside central Syria—operating openly inside that country for the first time. The villages are in an area critical to controlling a corridor between Syria’s Mediterranean ports and Hezbollah’s base in Lebanon’s Bekaa Valley.

Hezbollah leader Sayed Hassan Nasrallah said in a speech last week that his group wouldn’t hesitate to step up efforts to fight alongside the Assad regime in Syria. He portrayed the conflict there as an attempt by the West and allied Arab countries to wipe out Israeli foes Hezbollah and the Syrian regime in a larger war against Iran.

Reacting to the airstrikes, the Syrian Opposition Coalition—the political body for many of the rebels waging war to oust Mr. Assad—accused his government of weakening Syria’s armed forces by channeling all of its energies to protect itself. The opposition group, however, also condemned the airstrikes.

Syrian state media showed the aftermath of the airstrikes on Sunday almost 18 hours afterward. At first the media just broadcast statements by officials and analysis along with patriotic songs, some dating from the 1973 Arab-Israeli war.

Hezbollah’s Manar television was first to show footage, describing what it said was a Syrian arms depot in the Damascus suburb of Al-Dimass, off the Damascus-Beirut highway. The facility appeared to have been reduced to smoldering rubble. Flames were still raging in one section. Projectiles and ammunition were scattered about and the sound of secondary explosions could be heard.

Manar also showed what it said was another military supply complex hit by the strikes, one including a fuel depot, cement factory and a poultry farm. Dead poultry could be seen amid the rubble.

After the earlier airstrikes in January, Syria said it reserved the right to respond to Israel “in its own way,” but took little action. On Sunday, Syrian Minister of Information Omran al-Zobi said, “Syria is a state that won’t accept to be insulted.”

Israeli officials, while relieved to see longtime foe Syria weakened by civil war, have grown increasingly nervous about how the conflict is sowing chaos across that country.

The concern is that Hezbollah and other deeply anti-Israeli groups could use the confusion to gain control of more sophisticated and deadly weapons, possibly even including Syrian chemical weapons.

Some analysts said one goal of blocking Hezbollah from gaining precise, advanced missiles could be to limit the group’s ability to retaliate against Israel in the event Israel should strike Iran to prevent Tehran from becoming a nuclear power.

Iran chose to dispatch advanced weapons now to arm Hezbollah in case the Assad regime falls and its supply route to Lebanon is shut down, said Meir Javedanfar, an Iran analyst at the Interdisciplinary Center, a college in Herzliya, Israel.

Israel, on the other hand, is gambling that both Syria and Hezbollah are too preoccupied with Syria’s civil war to open another front, Israeli analysts said.

The Obama administration is still debating how to respond to its own stated “red line,” involving the use of chemical weapons. U.S. intelligence agencies believe chemical weapons have been used in small amounts in the Syrian war, but there are many ambiguities and Mr. Obama has said the U.S. needs more evidence before deciding whether and how to respond.

U.S. and European officials said the U.S. has stepped up talks with Britain and France on possible military options should the West reach a consensus to intervene—options that chiefly involve using air power to establish no-fly zones or to take out Mr. Assad’s air defenses.

The officials said the bar for intervention is high because there is little appetite in either the U.S. or Europe for another potentially open-ended conflict.

Reuters: Iran on Monday discussed with Russia proposals it...

Both Iran and West fear a trap on deal