Reuters: Saudi Arabia regards the involvement of Iran and Hezbollah in Syria’s civil war as dangerous and believes the rebels must be offered military aid to defend themselves, the kingdom’s foreign minister said on Tuesday. 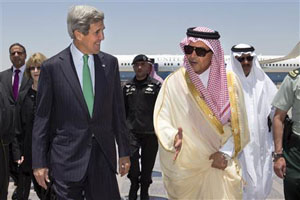 JEDDAH, Saudi Arabia (Reuters) – Saudi Arabia regards the involvement of Iran and Hezbollah in Syria’s civil war as dangerous and believes the rebels must be offered military aid to defend themselves, the kingdom’s foreign minister said on Tuesday.

Speaking at a news conference with U.S. Secretary John Kerry in Jeddah, Prince Saud al-Faisal added that Saudi Arabia “cannot be silent” about Iranian intervention and called for a resolution to ban arms flows to the Syrian government.

“The kingdom calls for issuing an unequivocal international resolution to halt the provision of arms to the Syrian regime and states the illegitimacy of the regime,” Prince Saud said.

Kerry has returned to the Middle East after a two-day visit to India, and will continue efforts to strengthen the Syrian opposition and revive peace talks between Israel and the Palestinians.

Prince Saud said the world’s top oil exporter “cannot be silent” at the intervention of Iran and Hezbollah in the Syrian conflict and renewed calls to arm the opposition and bar weapons sales to President Bashar al-Assad.

“The most dangerous development is the foreign participation, represented by Hezbollah and other militias supported by the forces of the Iranian Revolutionary Guard,” said.

“There is no logic that allows Russia to publicly arm the Syrian regime and the foreign forces that support it,” he added.

U.S. President Barack Obama has said he will arm the rebels but has not disclosed what type of assistance he will provide. Kerry is trying to ensure that the aid to the rebels is properly coordinated among the allies, in part out of concern that weapons could end up in the hands of extremist groups.

A meeting between Kerry and European and Arab counterparts in Doha last week agreed to increase support for Syria’s rebels although there was no consensus among the foreign ministers over providing arms, with Germany and Italy strongly opposed to the move.

More than 93,000 people have been killed in the Syrian conflict, which began as a popular protest movement against President Bashar al-Assad but has descended into a civil war with sectarian overtones.

Nearly 1.7 million refugees have fled into neighboring countries, including Lebanon, where clashes between armed groups supporting opposing sides in Syria have fuelled fears of a lapse back into sectarian civil war.

Saudi Arabia has become more actively involved in the Syrian crisis in recent months, expanding the flow of weapons to the rebels to include anti-aircraft missiles.

Rice asks for $75M for democracy in Iran

Dozens of women arrested in protest in Iran capital