Here’s how Iran censors the Internet

Washington Post: Discussion of Internet censorship usually focuses on China and its “Great Firewall.” But the Chinese Communist Party isn’t the only regime that censors its Internet. Iran does too.

By Timothy B. Lee

Discussion of Internet censorship usually focuses on China and its “Great Firewall.” But the Chinese Communist Party isn’t the only regime that censors its Internet. Iran does too.

Little is known about Iran’s censorship system because Iranian citizens who probe the network from inside the country risk reprisals from the government. But earlier this year, two anonymous Iranians teamed up with Alex Halderman, a computer science professor at the University of Michigan, to conduct one of the first systematic studies of Iranian Internet censorship to be published outside Iran. Halderman presented his findings at a Tuesday talk at the Usenix Security conference in Washington, D.C.

Iran has an extensive list of blacklisted sites. Users who attempt to visit a banned site see a notice that looks something like this: 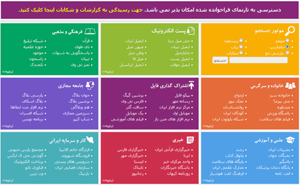 What gets censored? To find out, the researchers attempted to visit the sites on Alexa’s top 500 lists in various categories. Almost half of the 500 most popular sites on the Internet are censored. Unsurprisingly, the theocratic Iranian regime censors pornographic Web sites most heavily. But a high percentage of sites in the “art,” “society,” and “news” categories are also blocked:

In addition to banning particular sites, the Iranian network also filters traffic based on its content. In one test, the researchers created a file called sex.htm that was hosted outside the United States. Access to this page from inside Iran was blocked.

The Iranian Internet is also configured to discourage the use of certain encrypted protocols. Web traffic is allowed through at full speed. Traffic that uses the encrypted SSH protocol, which can be used to “tunnel” other types of traffic out of the country, run at less than 20 percent of the network’s full speed. Traffic the Iranian firewall doesn’t recognize is throttled even more dramatically, and gets cut off altogether after about 60 seconds.

The initial measurements were made in the weeks before the June 2013 elections, a time when the Iranian government was working to restrict the communications of the opposition. But after the election, they said, the throttling stopped, with all types of Internet traffic being transmitted at the same speed. Evidently, the throttling was a temporary measure to tamp down on dissent during a politically sensitive period.

Unfortunately, even unthrottled Internet access is extremely slow. The researchers find that a “large amount of Iran’s trafﬁc passes through a centralized facility,” where censorship filters are applied. Perhaps to avoid overwhelming this facility, or perhaps to limit access to high-bandwidth (and potentially subversive) video content, the government has established a nationwide speed limit of 128 kbps for users. That’s about twice the speed of old-school dialup modems, and 50 times slower than a typical connection in the United States today. Iranian academics can request special permission for a faster connection.

The pervasive censorship in Iran has led many Iranians to take countermeasures. Anti-censorship technologies such as Tor, FreeGate, Your Freedom, and Ultrasurf are widely used inside Iran, the researchers say. One of Halderman’s colleagues describes an incident that occurred in April 2010 on Iran’s Channel One. “The desktop of [a] machines [was] shown by mistake during news transition. In it, there was a shortcut for Your Freedom anti-censorship tool.” 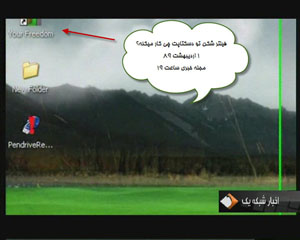 “This was widely mocked by many Iranian bloggers at that time,” one of Halderman’s Iranian co-authors said. But in a country where censorship is pervasive, it’s not surprising that even those with close ties to the regime would have to resort to circumvention technologies to get their jobs done.