AP: Waving Iranian flags and carrying signs, a throng of people gathered in protest near the United Nations on Tuesday to condemn Iranian President Hasan Rouhani, saying his recent moves seemingly toward a more conciliatory stance and dialogue with the United States is merely a ruse. 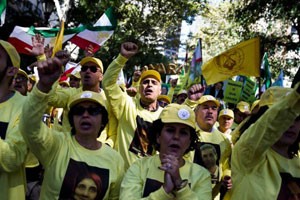 NEW YORK (AP) — Waving Iranian flags and carrying signs, a throng of people gathered in protest near the United Nations on Tuesday to condemn Iranian President Hasan Rouhani, saying his recent moves seemingly toward a more conciliatory stance and dialogue with the United States is merely a ruse.

Part of Rouhani’s campaign was a pledge that he would work toward reducing tension between Iran and the West over the country’s nuclear program, tension that has led to crippling sanctions placed on the nation. Iran has refused to shut down its uranium enrichment program, saying it’s merely interested in energy and medical purposes. The West has cast a suspicious eye on the program, fearing that it could ultimately lead to Iran having nuclear weapon capability.

Since taking office, Rouhani has urged the West to roll back some of the sanctions in order for negotiations to move forward.

But those at the rally said Iran’s leader had to take some actions to prove the leadership’s sincerity, not just demand sanctions be lifted, and that Iran had made empty gestures about negotiations in the past.

“If we’re going to approach these negotiations with maturity and realism, we must recognize that the Iranian regime has taken us down this road before, and they fooled us before,” Giuliani said. “If we let them fool us again, then we are fools.”

The Iranians at the rally carried signs and wore t-shirts in support of the opposition movement to Iran’s regime, and accused Rouhani of having a long history of taking action against members of the opposition.

“The world’s conscience needs to speak up” against Iran’s ruling power, said Angela Mostashari, 52, a former nurse from Los Angeles.

The U.S. has reacted positively to Rouhani’s statements, with President Barack Obama saying he had directed Secretary of State John Kerry with pursuing the prospect of a nuclear agreement with Iran. Kerry, along with representatives from five other world powers, is to meet Thursday with Iran’s new foreign minister, Mohammad Javad Zarif.

If Kerry and Zarif hold one-on-one talks on the sidelines of that meeting, it would mark the first direct engagement in six years between a U.S. secretary of state and an Iranian foreign minister.

Obama addressed the General Assembly on Tuesday morning, saying he was willing to go down the road of diplomacy, but that Iran had to back that up with tangible actions.

The Hill: The bill  gives Western negotiators even greater...