AP: In Tehran’s largest anti-U.S. rally in years, tens of thousands of demonstrators joined Monday in chants of “death to America” as hard-liners directed a major show of resolve against President Hassan Rouhani’s outreach to Washington.
The Associated Press 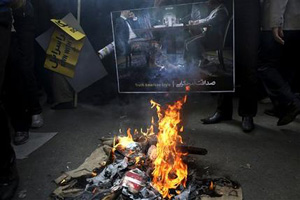 TEHRAN, Iran (AP) — In Tehran’s largest anti-U.S. rally in years, tens of thousands of demonstrators joined Monday in chants of “death to America” as hard-liners directed a major show of resolve against President Hassan Rouhani’s outreach to Washington more than a generation after crowds on the same streets stormed and occupied the U.S. Embassy.

Such American-bashing protests occur every year outside the former embassy compound to mark the anniversary of the 1979 takeover following the Islamic Revolution. But the latest demonstration had a dual purpose of sending the boldest warning yet to Rouhani’s government over whether it can expand dialogue with the U.S. or offer the concessions needed to possibly settle the nuclear impasse with the West.

“Fighting the global arrogance and hostile policies of America is the symbol of our national solidarity,” said Saeed Jalili, who lost to Rouhani in June’s election and later was replaced as the country’s top nuclear negotiator.

The choice of Jalili as the main speaker to the crowd showed how high the rifts reach in Iran.

Jalili is a leading voice of dissent over Rouhani’s overtures to Washington, but he is also a senior adviser to Supreme Leader Ayatollah Ali Khamenei, who has given critical support to Rouhani’s initiatives. The growing tensions have left Khamenei – the ultimate decision-maker in Iran – in the unusual role of domestic diplomat.

He had stood by Rouhani in apparent hopes that the nuclear talks and outreach can ease Iran’s isolation from the West and roll back painful sanctions over Tehran’s nuclear program. At the same time, he cannot ignore Rouhani’s critics and seeks a middle ground built around his comments that American remains untrustworthy but Iran is strong enough to pursue talks and exchanges.

Another key test comes later this week when nuclear talks resume in Geneva between Iran and six world powers including the U.S. envoys. Negotiators left last month’s session expressing hope that Rouhani’s election – and full backing from Khamenei – could open room for progress in closing the gap between Western fears that Iran could eventually produce nuclear weapons and Iran’s claims that it only seeks reactors for energy and medical isotopes.

Any stumbles in the talks, however, will likely bring even greater protest backlash from hard-liners such as the Revolutionary Guard and its vast paramilitary network.

In a symbolic show of force, they slammed back at appeals by Rouhani’s backers to drop the longstanding chant of “death to America” in light of the groundbreaking exchanges opened in late September during the annual U.N. General Assembly – which included a call from President Barack Obama to Rouhani as the Iranian president headed to the airport. Ties between the two countries were severed after the embassy siege, which began a hostage crisis with 52 people held for 444 days.

White House spokesman Jay Carney acknowledged the process would not be easy.

“As the president has said, the history of mistrust between the United States and the Islamic Republic of Iran is deep and it will not be erased overnight. But what we are doing now is not about trust,” he told reporters in Washington. “We’re engaged in serious and substantive negotiations that offer the possibility that we can stop the advance of Iran’s nuclear program, gain more transparency into their nuclear activities and negotiate a long-term comprehensive solution that resolves the international community’s concerns about Iran’s nuclear program.”

Asked about the demonstrations and calls of `death to America’ in Tehran on this anniversary, Carney said: “We believe that the vast majority of Iranians would prefer a better relationship with the West and would prefer the benefits of that better relationship with the West, including economic benefits of rejoining the international community to the current status quo.”

Jalili said the chant “death to America” – which rang out strongly among the more than 50,000 people outside the former embassy – is a symbol.

“It’s not death to American people, but it’s against a portion of Americans who support oppressive policies in the world. If we say `death to America,’ it is death to megalomania. `Death to America’ means death to think tanks that work for the destruction of nations.”

Protester Reza Farahbakhsh called the rally “more spirited” than recent years, when crowds dwindled to several thousands and had to be padded with school children brought by bus.

“Some people said, `Let’s not chant death to America this year, it is not good for us,'” he said. “The world must see this.”

It’s not the first time critics of the dialogue have made their views known.

A group of protesters hurled insults and eggs at Rouhani’s entourage upon his return from New York. Late last month, huge banners appeared around Tehran depicting the U.S. as a sinister and deceitful adversary that seeks to weaken Iran. Tehran officials ordered the signs removed, but they appeared in poster form at the demonstration Monday outside the former embassy compound.

Protesters also stomped on images of Obama and burned the U.S. flag. Others carried well-known banners reading “We trample America under our feet” and “The U.S. is the Great Satan.” One image showed Obama in a wrestling uniform with Star of David earrings, symbolizing Israel.

On Sunday, Khamenei appeared to chide hard-liners by denouncing any attempts to undermine Iran’s nuclear negotiators even as he praised Iranian militant students who stormed the U.S. Embassy in 1979 – reflecting his difficult balancing act between moderates and foes.

Diplomats “are on a difficult mission and nobody should weaken those who are on assignment,” the official IRNA news agency quoted Khamenei, who has final say on all matters of state, as telling a group of students.

Outside the former embassy’s brick walls – covered with anti-U.S. murals – students carried a model of a centrifuge used in uranium enrichment. A slogan on it read: “Result of resistance against sanctions: 18,000 active centrifuges in Iran.”

“These are lies,” he said during Monday’s rally. “These are tricks to hinder our progress.”

AFP: Iran on Tuesday rejected a plan proposed by...