AFP: Israel said Sunday it had found 40 long-range rockets aboard a ship it intercepted in the Red Sea, charging that it carried weapons sent by Iran to Gaza Strip militants. 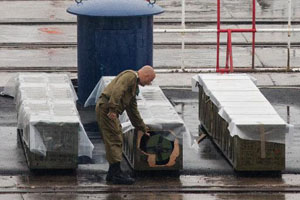 Eilat (AFP)— Israel said Sunday it had found 40 long-range rockets aboard a ship it intercepted in the Red Sea, charging that it carried weapons sent by Iran to Gaza Strip militants.

A statement from the Israeli military said the M-302 rockets with a range of 160 kilometres (100 miles) were found in containers offloaded from the Panamanian-flagged Klos-C.

The vessel was intercepted by Israeli naval commandos on the high seas on Wednesday between Sudan and Eritrea and escorted to the Red Sea port of Eilat by two warships.

It arrived late on Saturday and was inspected and unloaded on Sunday in an operation dubbed “Full Disclosure”.

It said the unloading and inspection of containers was carried out by a combined task-force including the Israeli Navy, the Combat Engineering Corps and the Ordnance Corps.

“Each one of these rockets poses a threat to the safety of the citizens of Israel -? each bullet and each rocket that was discovered had an Israeli address,” army chief Lieutenant General Benny Gantz told sailors who took part in the operation.

“Our efforts in preventing the proliferation of weapons and the supply of critical components with strategic influence over the region is not over,” Gantz said.

“There are many other missions ahead of us.”

Iran has flatly denied any involvement with the shipment, but Israeli Prime Minister Benjamin Netanyahu on Sunday accused the Islamic republic of “brazenly lying”.

The premier and Defence Minister Moshe Yaalon are due to attend a news conference in Eilat on Monday at which the weaponry will be put on display.

Public radio said ambassadors and military attaches would also be there to see the equipment “to prove to the world that Iran sends military aid to terrorist groups active in the Gaza Strip”.

Netanyahu accused Tehran of “brazenly lying” over its involvement in the shipment, in remarks he said were directed at EU foreign policy chief Catherine Ashton who is in Iran.

“I’d like to ask her if she asked her Iranian hosts about the delivery of weapons to the terror groups, and if she didn’t, why not?” he said at the weekly cabinet meeting.

“Nobody has the right to ignore the real, murderous actions of the regime in Tehran,” he added.

Ashton’s visit, the first by a EU foreign affairs chief since 2008, comes after Iran signed a preliminary deal in November with world powers under which it agreed to curb its disputed nuclear activities in exchange for sanctions relief.

Israel was harshly critical of the interim nuclear agreement with Iran and is pushing hard for world powers to keep a series of crippling economic sanctions in place.

The West and Israel have long suspected Iran of using its nuclear energy programme as a cover for developing atomic weapons, a charge Iran denies.

The ship’s seizure coincided with a high-profile trip to the US by Netanyahu.

“Netanyahu is in Washington… and all of a sudden as a godsend, they capture a ship from Iran with missiles. Just a coincidence?” Zarif said in Jakarta, adding that “it is a lie”.

If fired from Gaza, rockets with a range of 160 kilometres could easily reach Israel’s commercial capital Tel Aviv.

“We are going to prove that Iran organises secret operations to arm terrorist groups in Gaza,” he said.

The Islamist Hamas movement ruling Gaza, as well as the militant group Islamic Jihad, have denied they are linked to the weapons shipment.

And Sudan, where Israel said the weapons were to be offloaded before being shipped overland to Gaza via Egypt’s restive Sinai Peninsula, has also denied any involvement.