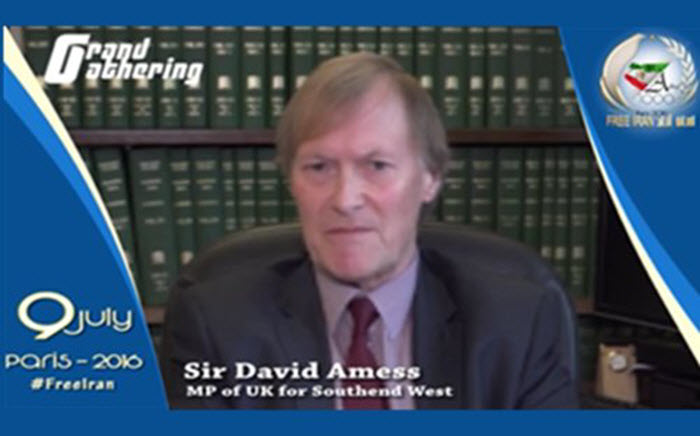 Iran Focus
London, 6 Jul – Sir David Amess, a Member of Parliament from the United Kingdom, has written an op-ed piece for Forbes in which he urges Western politicians and the public not to forget about Iran.

The Conservative MP for Southend West accuses the West of inaction with regards to the brutal punishments carried out by the regime, which disproportionately affect opposition forces and minorities. He says that tales of executions, floggings, amputations, and blindings are met with “concern” rather than action by Western governments.

According to the UN, there were over 1000 executions in 2015 alone; in fact, the rate of executions (including that of juveniles) has actually increased the nuclear pact last year. Currently, Iran is the largest executioner per capita in the world and President Rouhani describes these executions as “God’s commandments”.

He also explained how Iran is sponsoring terrorism through its continued nuclear weapons tests and interference in the Syrian civil war to help the Assad regime. The Iranian Revolutionary Guards Corps (IRGC) even convinced Afghan refugees to fight on their side against the Syrian people.

Amess, who is also a co-chair of the British Parliamentary Committee for Iran Freedom, warns that the world will pay a high price if we allow the regime to continue like this.

He said: “Our history books are littered with examples. The decision to not get involved in Rwanda enabled genocide, the decision to not act decisively on North Korea left a growing nuclear threat and the decision to ignore Syria helped the Assad regime on one end and extremist groups on the other, including ISIS. We must not ignore Iran.”

Amess doesn’t wish to see more violence in the region, so he argues against the “militaristic approach” of the Iraq war. Instead, he wants to help empower the Iranian people to get the democratic government that they deserve.

One of the ways he suggests is supporting the Iranian Resistance., specifically the National Council of Resistance of Iran (NCRI), led by Maryam Rajavi. They want to see a free and democratic Iran with a secular government.

The NCRI have a ten-point programme to achieve peace in Iran including the abolition of capital punishment and strong links with the countries both close by and around the world.

On July 9, a rally will be held in Paris with supporters of the Iranian Resistance. They wish to bring to light the horrific abuses of the regime and to call on Western governments to condition their relation with Iran with an end to human rights suppression within the country.

Former French PM wants Paris to be tough on Iran

AP: A year after her Nobel Peace Prize was...