Maryam Rajavi: We Will Not Give up Our Fight for Iran Freedom 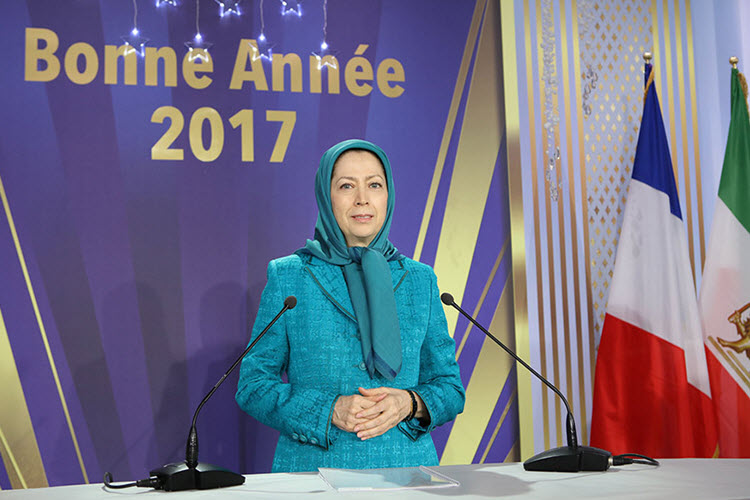 London, 9 Jan – The president-elect of the Iranian Resistance, Maryam Rajavi, has publicly restated her dedication to liberation for the Iranian people.

She made this declaration in front of French politicians and Iranian Resistance supporters during a New Year celebration at Auvers-sur-Oise, on January 8.

She was celebrating the achievements of the Iranian Resistance throughout 2016 and lamenting on the suffering for both the Iranian People and the world in general.

Rajavi condemned the terrorist activity that plagued France and other nations over the past year as savage, noting that those who commit such atrocities and call themselves Muslims; know nothing of the teachings of Islam.

She also mourned for those Iranian Resistance supporters who were lost during 2016, including Michelle Lojet, Annie Boussie, and Victor Gulotta.

She rejoiced the successful and safe transfer of all Iranian Resistance members (who were exiled to Camp Liberty in Iraq) to Albania. While in Iraq, even though they were supposedly “protected persons”, they were subjected to rocket attacks from Iran.

Rajavi said: “A new chapter has begun in the history of the Iranian Resistance. But first, we must help our friends in Albania.

Accommodating and re-organizing such a large number of people in a short period of time is not a simple task, and it imposes a heavy financial burden on the Resistance, as well. This is an effort that needs time and tremendous energy. One of the main problems is attending to the needs of the sick and wounded who were deprived of treatment for a long time. But with the support of each and every one of you, I am confident that we can overcome the problems.”

2016 was also a significant year for demonstrations within Iran, from workers’ strikes to sit-ins in support of political prisoners to student protests.

In August, an audio file was released which revealed the role that current regime officials played in the 1988 massacre of 30,000 political prisoners. From that, a Justice Seeking Movement was launched and people wanted the Regime held to account.

Rajavi said: “The families of the massacred victims dared to hold the regime accountable, and the regime faces a crisis because the officials responsible for these crimes are the same persons who are presently ruling the country. We are determined to continue this struggle until those responsible for this horrific crime are prosecuted.”

As for the Regime’s role in the Syrian conflict, it has been atrocious. In order to back up a fellow dictatorship, Iran has supplied arms and personnel to crush the Syrian opposition; thus making Iran the “main obstacle to peace in Syria”.

Rajavi said: “We hope that the Syrian people’s demand for ending the dictatorship of Bashar Assad is realized and peace and democracy are restored in their country. The only lasting solution for this problem is to evict the Revolutionary Guards Corps and their militia groups including the Hezbollah from Syria.”

The current ceasefire gives hope that the Syrian Opposition and democracy will prevail and hopefully, the Iranian Resistance victory will follow shortly after.

AP: The lawyer defending a woman sentenced to death...