London, 19 May – In the final day or so before the so-called presidential “election” in Iran between incumbent President Hassan Rouhani and Ebrahim Raisi, a cleric with close ties to the Supreme Leader, the scene on the ground is far different from the portrait painted by the regime’s state-run media and some western outlets.

The vast network of dissidents supporting the Iranian opposition People’s Mojahedin Organization of Iran (PMOI/MEK) has come alive in unprecedented scale to voice the true feelings of the Iranian people about the candidates and the regime in its entirety.

Cities and towns across the country, including major metropolitan centers such as Tehran, Mashhad, Isfahan, Tabriz and Shiraz, have been scenes of brave activists daring many odds and challenges to put up large posters and images of Iranian opposition leader Maryam Rajavi from bridges and overpasses, car windshields and even the walls of buildings belonging to the regime’s security forces, such as the Revolutionary Guards Bassij.

Such support for the MEK inside Iran is considered utterly forbidden and the activists face apprehension, torture and possibly even execution. MEK supporter Gholamreza Khosravi was jailed and eventually executed for merely providing financial support for an MEK-affiliated satellite TV network in 2014.

While Iran’s presidential election is a game played by the regime every four years, MEK activists have gone the limits to raise voice for a national boycott of the polls scheduled for May 19th. Many of the posters and leaflets read in Farsi:

“My Vote Maryam Rajavi”, “No to executioner Raisi, No to Demagogue Rouhani, Our Vote Regime Change”, and “Down with the mullahs’ regime, Down with Khamenei, Hail to Rajavi”.

The scope of this campaign has penetrated the walls of Iran’s notorious prisons as a group of political prisoners in Gohardasht Prison of Karaj, west of Tehran, issued a letter calling on their fellow countrymen to boycott the ballot boxes.

“… in one voice and hand in hand with people from all walks of life in our enchained country, we boycott this ridiculous façade and announce our demand for a free and fair election under international supervision to establish a free society based on the rule and freedom of all its people, without any gender, ethnic, religious and… segregation, and to be founded based on the Universal Deceleration of Human Rights.”

“The upcoming election sham, as it has always been the case, is just a ritual of dividing the power among the factions which make up the ruling religious tyranny. It does not enjoy any legitimacy among the people of Iran. The outcome, whatever it be, is rejected and disdained by the Iranian people and Resistance. In any case, the crisis-riddle clerical regime will emerge weaker and more vulnerable in the wake of this election,” Rajavi said.

Reports from inside Iran also indicated skirmishes in Tehran’s Tajrish district on Friday. The ruling regime is highly concerned these days, knowing the potential of a 2009-scenario repeat and dispatching at least 260,000 security forces across the country specifically to maintain its grip with an iron fist over a highly restive Iranian population.

The state-run Paytakht (Capital) Magazine posted a piece recently reflecting the regime’s concerns over the growing scope of these dissident measures. 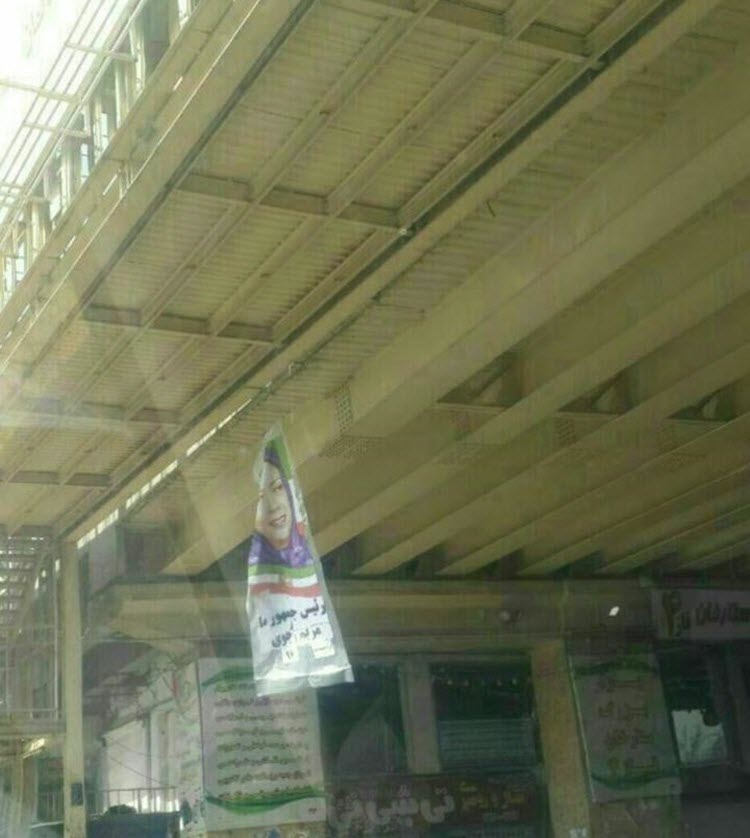 International bodies are reacting in kind as 156 European Parliament members issued a joint statement declaring, “The elections in Iran are not free and fair.”

Official news agencies in Iran have in recent weeks reported of PMOI/MEK network activities “effecting the elections”. Various regime websites have written of a “campaign for boycotting the elections”, “calls for street protests” and “hanging portraits of Maryam Rajavi in the streets of Tehran.” According to video clips from Iran, these images were accompanied by slogans such as “No to murderer Raisi, no to imposter Rouhani, Our vote: Regime overthrow.”

Wall Street Journal: The international community, led by the...