Path Toward Meaningful Change in Iran: “Overthrow of the Iranian Regime by the Iranian People and Resistance” 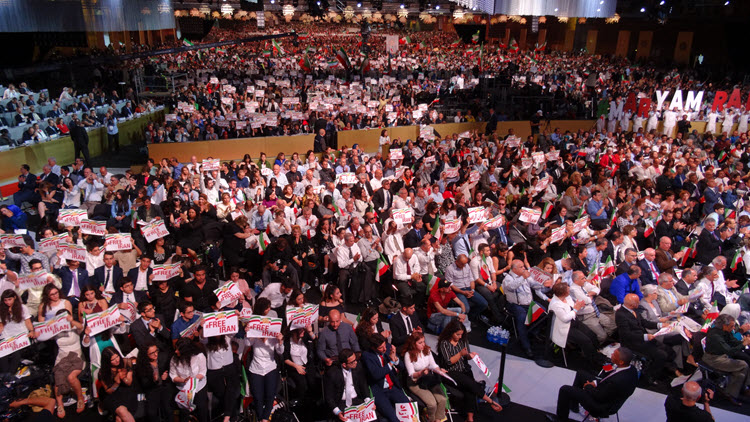 London, 8 Jul – Change is coming for Iran with developments recently accelerating. The international community is realizing that appeasement doesn’t work.

July 14th marks the beginning of the second year of the Iran nuclear deal. Iran received a reported $100 billion dollars but has failed to make meaningful changes in people’s lives. Tehran has instead allocated these funds for their involvement in the Syrian war, and to meddle in affairs across the Middle East.

In Iran’s May 19th presidential election, Khamenei backed conservative cleric Ebrahim Raisi. Raisi is notorious for his role in the 1988 massacre of at least 30,000 political prisoners. With a massive campaign launched by activists of the Iranian opposition People’s Mojahedin Organization of Iran (PMOI/MEK) inside Iran, Khamenei’s candidate stood no chance.

Incumbent President Hassan Rouhani was able to secure a second term, but that “will not render any change in the regime’s status quo. In fact, quite the opposite,” writes Heshmat Alavi in his article for Forbes. He continues, “In an attempt to fabricate the final vote tally, the mullahs’ regime boasted a 70+ percent voter participation. Merely a month later, however, Iran’s Assembly of Experts, an 88-cleric body tasked to select the next supreme leader and supposedly maintain him under their oversight, issued a statement declaring “people’s votes, demands and views” are of no significance whatsoever. This is the Iranian regime’s definition of democracy.”

In reviewing the past 38 years and the changing status in and out of Iran today, Alavi reaches these three conclusions:

1. The rule of the mullahs’ dictatorship in Iran must come to an end.

2. Such an objective is now within reach more than ever before. Rifts inside Iran’s political hierarchy are inflicting deep, irrecoverable wounds.

3. In contrast to its neighbors, Iran enjoys a democratic alternative and an organized opposition movement fully capable of setting this regime aside.

It’s been proven that reform from within, through 20 years of three presidents claiming to be reformists/moderates hasn’t occurred. Akbar Hashemi Rafsanjani, Mohammad Khatami and the current Hassan Rouhani have all failed to effect any change. Three decades of appeasement by the West has failed, as well.

“And yet, despite the deafening propaganda orchestrated by the mullahs’ regime, this apparatus is threatened most not by a foreign foe, but the numerous protests and revolts witnessed each day through Iran. This is a ticking time bomb winding down fast,” writes Alavi, adding, “The regime’s incompetence in resolving domestic and foreign dilemmas, and its failure to obtain nuclear weapons has left the ruling regime highly concerned over the road ahead. Unfortunately, the countries going through the Arab Spring had no alternative apparatus to replace their ousted ruling governments. This is not the case with Iran.”

As seen in the following development, The National Council of Resistance of Iran, (NCRI), an umbrella coalition with the PMOI/MEK as its core member, has a great deal of influence inside Iran:

• Back in 2009 the NCRI established the main uprising core across Iran, elevating the motto of “Where is my vote?” to a more demanding, “Down with the Dictator.”

• For a year now the NCRI has directed a campaign focusing on seeking justice regarding the 1988 massacre. Iran, with its very young population, witnessed the regime succumbing to the people’s will of condemning Raisi for his role in the mullahs’ decades of executions.

The Iranian opposition, represented by the NCRI, is leading the effort for change. Alavi writes, “The NCRI hoisted the flag peace and freedom in response to the mullahs’ warmongering, been the sole supporter of the Syrian people from their first protests back in March 2011, and continuously blown the whistle on Iran’s notorious nuclear and ballistic missile ambitions.”

And so, a solution is available, but it demands strong decisions by the United Nations, European Union, United States and regional countries. Alavi outlines these descisions:

• Designating the Revolutionary Guards as a foreign terrorist organization;

• Revoking Tehran’s membership from all international organizations, including mainly the UN and the Organization of Islamic Cooperation;

The organized resistance of the Iranian people, pioneered by the NCRI, is capable of ending the regimes’s rule. At their annual convention in Paris last weekend, Iranian opposition leader Maryam Rajavi was the keynote speaker. She delivered a new perspective on how to resolve the Iran dilemma. As Mrs. Rajavi said, “…the ultimate solution to the crisis in the region and confronting groups like ISIS, is the overthrow of the Iranian regime by the Iranian people and Resistance.”

AP: A dissident group accused Iran on Wednesday of...