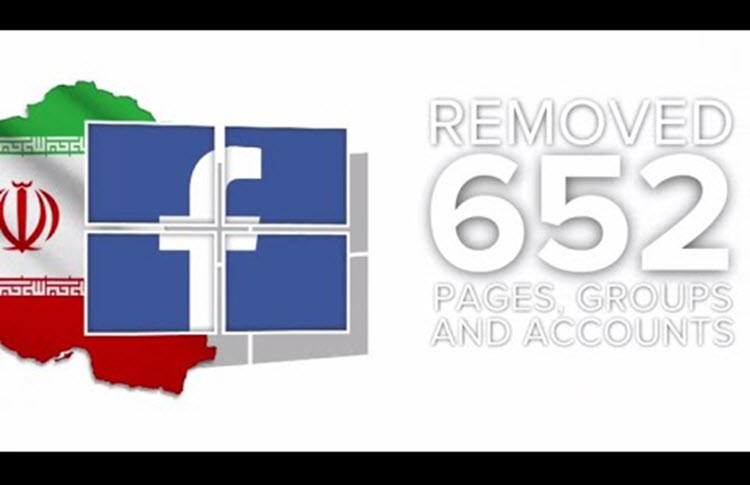 The Facebook Newsroom website said that it had removed 652 pages associated with political influence campaigns traced to Iran from its social media platform, “including coordinated inauthentic behavior that originated in Iran and targeted people across multiple internet services in the Middle East, Latin America, UK and US.”

Facebook was first alerted to this campaign by the cybersecurity company FireEye, months ago. FireEye wrote in a separate posting on its site that it had traced the Iranian campaign — including posts from supposed “American liberals supportive of U.S. Senator Bernie Sanders” — through email addresses and phone numbers associated with the “inauthentic” accounts.

FireEye’s discovered a fake U.S. news outlet called “Liberty Front Press,” which triggered its investigation. Facebook says it was created in 2013. Over time, the players involved with that site branched out into different personas intended to appeal to different audiences — including “anti-Saudi, anti-Israeli, and pro-Palestinian themes.”

Other examples were accounts such as, “The British Left”, which published content in support of U.K. Labour party leader Jeremy Corbyn, as well as the pro-Palestinian “Patriotic Palestinian Front.” Additionally, FireEye says it has “identified multiple Arabic-language, Middle East-focused sites” as part of the effort.

FireEye said it found found links between the campaign and Iran’s state-run TV propaganda channel, PressTV, but no links to APT35—a hacking group which has targeted American defense companies and Saudi energy firms.

The security firm said that Iran has spent a lot of money on developing its cyber capabilities. It expanded its campaign beyond Facebook and Instagram and into Twitter. Twitter announced in a separate statement late Tuesday, that it had suspended 284 accounts for what it said was “coordinated manipulation”, and that “it appears many of these accounts originated from Iran.”

What appears to be an account associated with the campaign deleted its tweets, but Google cache results shows that the recovered tweets linked back to the LibertyFrontPress.com website. The account used hashtags like “#Resist” and #NotMyPresident when tweeting out anti-Trump sentiments. It also said, regarding the Supreme Court nomination of Judge Brett Kavanaugh, “The #Senate has a responsibility to reject any nominee who would fail to be a fair-minded constitutionalist. That is #BrettKavanaugh. We must #StopKavanaugh.” It also slammed the Republican party for allowing anti-semite and Holocaust denier John Fitzgerald to run for a seat in the California legislature.

In July, Facebook took down a handful of accounts purporting to be black, Hispanic, and #Resistance activists. While Facebook didn’t attribute the campaign to a specific country or group, it noted that some of the accounts had links to the infamous Russian Internet Research Agency troll farm.

Facebook said that the delay of “many months” after being alerted by FireEye allowed the company to further investigate the campaign, and to also strengthen its defense for the future.