Fear of ‘Social Crisis’ and ‘Dark Horizon’ for Iran’s Government 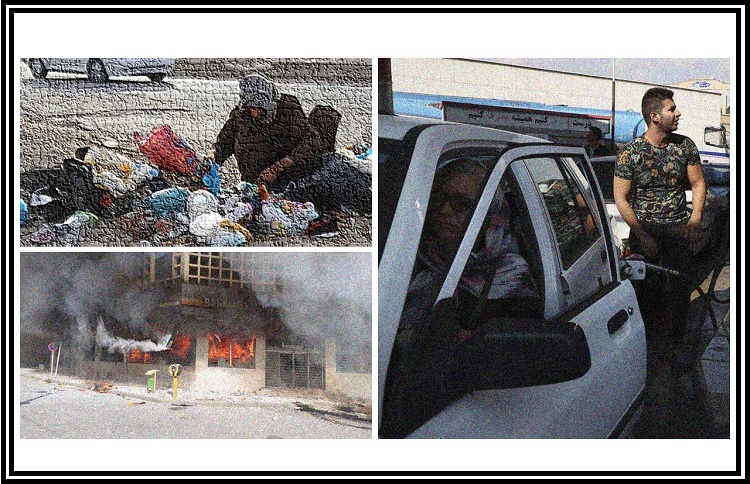 Following the announcement of the new hiked gasoline prices in Iran, an uprising and public outcry over this predatory decision have increased. The decision by the Rouhani government, while pressuring many people directly, also indirectly puts a lot of pressure because of the high costs associated with transportation.

State-run news agency Tasnim said on 16 November: “The Economic Coordination Council, which is a supranational council, has decided to raise gas prices after several sessions of reviewing fuel prices. The council’s decisions are decisions of the entire government, and the leadership has also pledged to support its decisions.”

This shows the involvement of the entire system and, most importantly, Supreme Leader Ali Khamenei‘s direct involvement in gasoline pricing.

The government’s main goal of raising the gasoline price is to fix the budget shortage, but it is pretending that they are combating gas smuggling and reforming subsidy distribution for the benefit of the public.

It is also a deceptive claim – that the government with the rise in gasoline price will give the people any additional subsidies. And if it does something, it will not solve anything, because in Iran the poverty line currently stands at 80 million rials.

The Rouhani-affiliated Arman newspaper admits to the fact: “This (gasoline price hike), which caused a 50 to 300 percent increase, will definitely have a negative economic impact and affect other commodities, even if this rise in prices will be beneficial to society itself.”

“Because of the inflation and rising the general levels of prices, what the government wants to give people may not have the necessary effect, just as subsidies of 450,000 rials in recent years have had little effect.” (Arman, 16 November 2019)

The Jahan-e-Sanat newspaper also refutes the government’s claim that it will pay people for the gasoline’s rising cost. It wrote: “Government officials may claim that tax money and raising gasoline rates, which are government revenues, finally both directly and indirectly will go back to the Iranian citizens, but this claim, of course, is not realistic.” (Jahan-e-Sanat, 16 November 2019)

Regarding the side effects of this plan on the livelihood of the people, the Resalat newspaper said: “With this project that is now underway, a large part of the lower strata of society will go under double economic pressure.” (Resalat, 16 November)

The fact is that during the past four decades of theocratic rule, every time governments have raised the price of energy carriers, they have not simply improved the country’s economic situation and people’s livelihoods, but have also increased inflation, unemployment, and significantly increased the price of the necessaries of the people.

“If we put together low-income earnings, rising inflation, unemployment, rising prices and the frustration of the public, we can paint a dark horizon of the future of the country’s economy, and the government’s livelihood support will not be able to get anywhere in these conditions.” Jahan Sanat newspaper acknowledged on 16 November 2019.

In another article, this state-run newspaper emphasized that “not only does the government’s livelihood support not change anything”, but “the fact is that the Rouhani government’s decision is not just a support for people’s livelihood, as previous experiences show, instead it has proven that this decision will also be at the desire of looters and to the detriment of the majority of poor and deprived Iranians.”

One side effect of the plan is a rise in the price of all commodities, as the vice-president of the Iran-China Chamber of Commerce said, “Such a decision on one of the key factors of the country’s economy will have a direct impact on the price of everything.”

It is not without reason, that the people refuse to keep silent against this harmful decision, and immediately after the announcement of the new price of petrol across the country, they took to the streets of more than 93 cities.