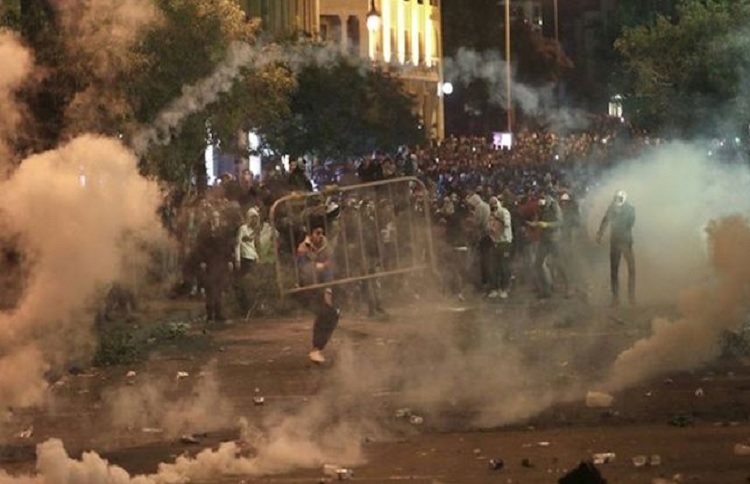 In Lebanon, while the political turmoil escalates over the appointment of a new prime minister, protesters flooded into Beirut’s streets on Sunday, December 15. They demonstrated their denouncing of the country’s rulers by gathering in downtown Beirut.

Notably, on Sunday morning, Hezbollah’s proponents, who are practically known as a branch of the Revolutionary Guards (IRGC) Quds Force, assaulted protesters at the Shohada [Martyrs] square and torched their tents. Widespread conflicts that triggered on Saturday night into Sunday morning left 70 injured among the people.

On December 16, the Agence France Presse (AFP) reported the clashes in Beirut continued “Sunday for the second consecutive night near the parliament on the eve of much-delayed consultations to form a new cabinet needed to fix a deepening economic crisis.”

During these clashes, at least 70 protesters were wounded by rubber bullets and tear gas. On the other hand, “Lebanese security forces said about 20 from their ranks were hospitalized,” AFP added.

Reuters also attended to recent clashes in Lebanon and security forces attempts to dispersing protesters by tear gas and rubber bullets. It reported, “Tear gas engulfed central Beirut as security forces chased protesters near Lebanon’s parliament on Sunday in the second night of street clashes that wounded dozens of people.”

In Iraq and Lebanon, Protesters Are Calling for an End to #Iran’s Meddling! https://t.co/k5lHHkbNoR via @Iran_Focus

Remarkably, on Saturday, December 14, supporters of Hezbollah and its ally Amal movement attacked Lebanese demonstrators in numerous squares across Beirut, including the Shohada and Riadh Al-Solh squares. The Lebanese Army intervened and dispersed the attackers.

In these circumstances, even though it is expected for Saad Al-Hariri to be announced as Lebanon’s prime minister, political rifts deter rescuing this country from its drastic economic crisis. Factually, Hariri is at “odds with Iran-backed Hezbollah and its allies, including President Michel Aoun, over the make-up of the next government,” Reuters reported on December 15.

Regarding Lebanon’s worst economic crisis since the 1975-1990 civil war, this country is in dire need of foreign donors to pull out of these dire conditions. However, the donors merely depended on establishing a new cabinet able to implement necessary reforms. In this regard, Saad Al-Hariri pursues forming a cabinet of technocrat ministers who can assist him in overcoming the current crisis.  His Iran-backed opponents, however, are attempting to maintain their allies in power.

It is worth noting that recent developments in Lebanon and Iraq are deeply concerning for Iranian authorities. They obviously see how their long investment in the Shiite society in both countries has gone down the drain and they are losing their authority in the entire Middle East.

On December 14,  Ghorbanali Dorri-Najafabadi, a member of Iran’s Expediency Council, spoke out about the nationwide protests in Iran, Iraq, and Lebanon, and their concurrency. He also shed light on his concerns over the people’s wrath and the Iranian organized resistance (NCRI/MEK) by raising false claims about foreign enemies.

“Recent incidents in the country [Iran], which took place following the gasoline price hike and incidents in Iraq and Lebanon, weren’t easily ended. There are thousands of conspiracies and betrayals behind them. As foes of this country have acknowledged themselves, they had planned for these incidents for two to three years,” said Iran’s former minister of intelligence and security.

Abbas warns Iran not to interfere