Fight Against Corruption in Iran’s Judiciary or Khamenei’s Successor? 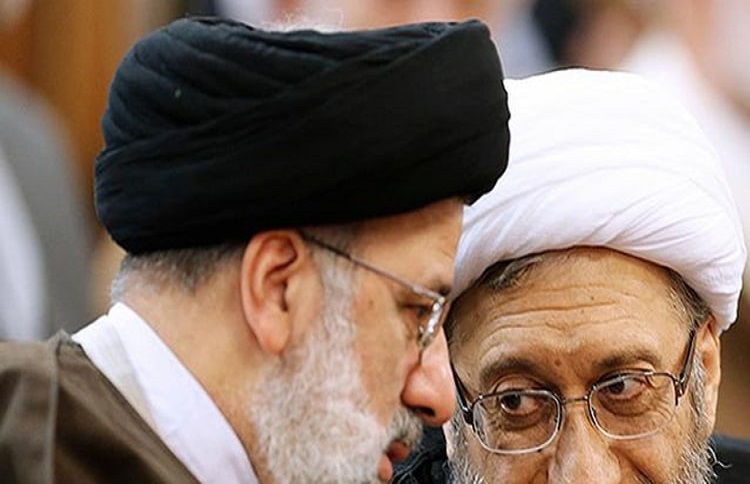 The corruption case of Akbar Tabari, a deputy to the former head of Iran’s Judiciary Sadeq Larijani, is becoming one of the main headlines of Iran’s media. The question here is what is going on?

Is it really the subject of fighting corruption in a regime that is engulfed from top to bottom in corruption, or is another strategic issue at hand for the regime?

Embezzlement and bribery are words used by this government to hide the true nature of what is taking place under this roof, which is in reality the plundering of Iranian people’s wealth.

Another example is the embezzlement case of 30 trillion rials by Mehrafarid Amir Khosravi with the cooperation of several members of Iran’s parliament, some being relatives of Ahmadinejad and Esfandiar Rahim Mashaei; Seyed Mohammad Jahromi, former Minister of Labor and former CEO of Bank Saderat; and Mahmoud Reza Khavari, then CEO of Bank Melli. This case was made public basin 2011.

In 2012, there was the corruption case of 32,500 trillion Tomans by Saeed Mortazavi, a judge and former prosecutor of Tehran. This embezzlement took place while Mortazavi was head of the Social Security Organization.

The corruption case of 180 trillion rials of the regime’s so-called “economic Basiji,” Babak Zanjani, in collaboration with several ministers and Ahmadinejad’s deputy, was also exposed in 2013.

After that, the corruption case of 80 trillion rials involving the regime’s ” Foundation of Martyrs and Veterans” during Ahmadinejad tenure, was also exposed in 2013.

Two years later in 2015, the corruption case of 8 trillion Tomans involving the IRGC Khatam al-Anbiya, was carried out by Adl Hashemi and Mohammad Rostami Safa.

The next example of a corruption case was the embezzling of 80 trillion Tomans from the Farhangian (teachers and educational staff) Reserve Fund and Bank Sarmayeh during Ahmadinejad’s tenure. The media published the case in 2016.

Theft and plundering of 52,110 trillion Tomans in Tehran Municipality during the years when Ghalibaf was Tehran’s mayor, was made public by Mohammad Ali Najafi, another former Tehran mayor in 2017 only after his career ended following a case involving him murdering his second wife.

Then came the biggest robbery ever committed in the regime. 6.6 billion euros was stolen from the country’s petrochemical industry. The case was reported by the media in 2018.

After that, the theft of $764 million along with the 30 trillion rials by Abbas Irvani in the “Azam Khodro Auto Parts Group,” a subsidiary of Iran Khodro and Saipa. This case was revealed in 2019.

All these examples are a tip of the iceberg of the corruption in this regime that has been made public, mostly due to the regime’s infightings.

Another case involved the brother of Iranian President Hassan Rouhani, who was imprisoned because of quarrels and disputes between the regime’s two main factions.

This case is more important since it took place in a ministry that claims to be the leading entity in Iran’s fight against corruption.

Although the 63 personal accounts raised against Sadegh Larijani had made headlines before this issue, the case remained completely silent back when he himself was head of the judiciary.

Furthermore, the Tabari case is important considering the controversy between the two main heavyweights of Khamenei’s faction, being Larijani and Raisi. This shows the depth of the power struggle and disagreements at the top of the regime.

Why is all of this is happening now, while we know that such infightings in this regime are nothing new, for example, the heated 2013 dispute between Rafsanjani and Khamenei, which ended with the disqualification of Rafsanjani from the presidential elections?

The truth is that the regime’s supreme leader needs a successor and Khamenei has planned to make Raisi his next in line. However, Raisi is loathed by the Iranian people due to his direct role in the summer 1988 massacre of tens of thousands of political prisoners in the regime’s dungeons.

In 2017, Raisi lost in the presidential race running against Rouhani, mainly due to his 38-year history of executions and torture.

That setback was costly for Khamenei, forcing him to place Raisi in one of the regime’s three branches to have the opportunity of grooming him as his successor and to save Raisi from any charges in the future.

This is also why Khamenei appointed Ghalibaf as speaker of the regime’s parliament and ordered the formation of a “Young and Hezbollahi government” following the 2021 presidential elections. Khamenei is aiming to have all heads of the three government branches in his camp to pave the path for his regime’s future.

As a result, Khamenei and Raisi need to whitewash Raisi’s past from any crimes and clear the public’s minds, especially from the crimes he committed during the 1988 massacre, where the victims were mostly the members and supporters of the Iranian opposition PMOI/MEK.

Other than that, all regime officials are deeply involved in corruption and there is no difference between them.

Iran: Futile Attempt to Whitewash the Pervasive Corruption of the Judiciary

Iran does not intend to hold bilateral talks with U.S.