Reuters: Iran is enriching nuclear material to higher levels as a backup plan because it fears it will not receive foreign fuel for a medical research reactor, Tehran’s envoy to the U.N. atomic watchdog said on Wednesday. 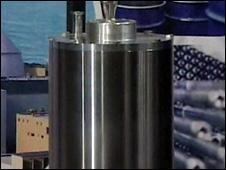 VIENNA (Reuters) – Iran is enriching nuclear material to higher levels as a backup plan because it fears it will not receive foreign fuel for a medical research reactor, Tehran’s envoy to the U.N. atomic watchdog said on Wednesday.

Iran started refining uranium to 20 percent purity in February saying it wanted to produce fuel for a reactor that makes isotopes for treating cancer after talks over a fuel swap deal proposal with big powers stalled.

The move sparked Western concerns as it brings the material closer to the level of refinement needed for atomic arms.

“We have to do it since we have been facing a lack of any legally-binding assurance of supply,” Ali Asghar Soltanieh told reporters. Iran says its nuclear work is for peaceful uses only.

Under a proposal drafted by the International Atomic Energy Agency (IAEA) in October, Iran would part with 1,200 kg of its low-enriched uranium — enough for an atom bomb if enriched to higher levels — in return for the special fuel rods.

Last month Brazil and Turkey resurrected parts of the plan, seen as a possible way to ease nuclear tensions with the West, and Iran said it agreed to it.

But Western officials have voiced doubts over the new plan because of Iran’s launch of higher scale enrichment and the growth in its low-enriched uranium stockpile.

Asked if Iran would stop 20 percent enrichment if the fuel swap took place, something analysts have suggested as a compromise to reassure the West, Soltanieh said: “We have to be very careful not to create precedents.”

“When we don’t need 20 percent uranium, we will not produce it,” he said. He urged world powers to cooperate with Iran over its nuclear programme and said new sanctions would not persuade Tehran to abandon it.

Soltanieh also denied a section in the IAEA’s latest report on Iran which said inspectors had discovered nuclear equipment had been removed from a research laboratory in Tehran after the agency had asked for details about the work.

“Nothing has been removed,” he said. “Whatever that is in this paragraph is wrong, we are writing to the director general and insisting that he corrects it.”

Diplomats said Soltanieh had not made the complaint in a closed-door IAEA briefing to countries on Wednesday despite talking at length about the report.

According to the report, Tehran told the agency it had started researching the production of uranium metal, raising Western concerns because this material has both weapons and civilian applications. In a visit in April inspectors noticed some of the equipment — an electrochemical cell — had gone.

There was no explanation, but removal of any nuclear equipment without agency knowledge would also raise questions.

An official with knowledge of the Iran investigation said the missing part was the “outer vessel” of the equipment and that the main section had been left in place.

Asked where the equipment is now, Soltanieh said: “It is as it was,” and added that he would explain the uses of the research in his letter to the agency.

US hikers freed from Iran arrive in Oman: AFP

AFP: The plane carrying two US hikers, released from...